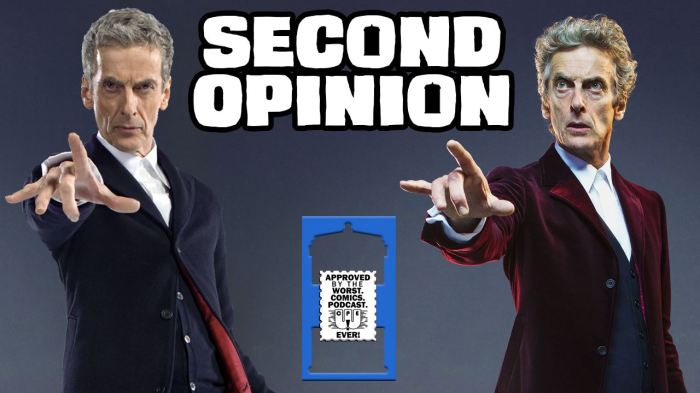 Jerry: Welcome back to Second Opinion. This week we are looking at Doctor Who season 9, episode 6, “ The Woman Who Lived.” With this season being 12 episodes, plus the Christmas episode, you could say we are at the halfway point of the season.

This episode is the second-part continuation from last week’s show, and it takes place about 300 years or so in the future.

Brent: I thought she said at one point that she had lived for 800 years though.

J: I’ll defer to your judgment.

J: In the show, we got a more active or a more involved Maisie Williams. Help me out here because it was late when I watched this, but where was the companion at this episode?

B: In the very beginning when the Doctor encounters Williams’ character disguised as the highwayman, he mentioned something about the one who normally does this is taking level seven taekwondo.

I’ve always gotten the impression, at least for the early stages of Clara’s involvement with the Doctor, that she was pretty much relegating maybe one or two nights a week to traveling with the Doctor, and then living her life in addition to that. I think there’s a wealth of adventures that the Twelfth Doctor has had without Clara so this would be one of them.

J: OK, I know I’m not supposed to speak ill of Clara (or the other companions), but it almost seemed like Williams would be a much more interesting companion to this particular incarnation of the Doctor.

B: I agree! I really thought that her entire performance in the two-parts, but specifically in this second part, was just amazing. It really felt like she had lived all of those years. That she carries the weight of the world and all of her memories that have just naturally worked their way out of her head as she’s lived longer and longer. She really gave an excellent performance.

J: Along those lines, the whole relationship between the Doctor and Williams was totally turned on its side. Both parties are essentially immortal! I know the Doctor does have limits on the number of regenerations he can have. But it changes the dynamics of how they can go about their adventures in their stories. You don’t have to worry about the well-being of the companion. 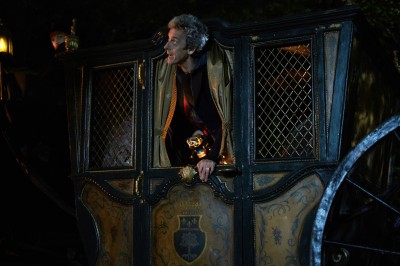 J: No, not at all. I’m just thinking back to the Tennant years and all of the encounters with Captain Jack. Wasn’t he immortal?

B: He became immortal through a plot device that’s too long and intricate to go into here.

J: It just made for a different dynamic for the Doctor, that’s all.

B: I did really enjoy the fact that he actually name-checked Captain Jack towards the end of the episode. Mainly because I mentally pictured John Barrowman sitting at home watching Doctor Who, and then just shouting “Woo Hoo” with Jack’s mention.

B: I get the feeling that Captain Jack is such a fan favorite, that they will save his return for a big, giant episode.  The return of the good Captain will set the internet on fire.  He’ll be saved for a special occasion.

Fans are really clamoring to see Captain Jack and River Song on screen together. And Moffat has said that they are both such staples of the new Doctor Who that they would be saved for huge events or for when they need a big ratings pull. We’ll see River Song in the Christmas episode this year.

I also think Barrowman’s Arrow filming schedule probably would play into it. I know he’s gotten permission from the Arrow producers that if he does get an opportunity to play Captain Jack, he will get the time off. His character of Merlyn is semi-regular, so they can work him in and out as they need to.

J: Let’s get back to “The Woman Who Lived.” Give me your impressions of the episode. You usually start off by asking me for my impressions, so lets start with yours first.

B: OK, I felt like that this particular episode was the best of the season so far. It wasn’t necessarily high on action, but it posed a lot of interesting philosophical questions about the very nature of being immortal. I think we got a better look into the Doctor’s psyche. With Maisie Williams’ character (who was going by the name of Me in this episode), you got a window into the Doctor’s character through her eyes and through what she’s gone through. I think this episode will be remembered as one of the more important ones, like the episode that Neil Gaiman wrote, “The Doctor’s Wife.” I do think this will one will be up among those classics.

What are your thoughts?

J: I liked Williams’ character and portrayal, but the episode really didn’t do much for me. It didn’t feel very memorable to me. Maybe I was watching it too late that night or something, but I was constantly doing that little check on the DVR to see how much time I had left. I didn’t hate the episode, but I don’t know that I necessarily really liked it either.

Another neat thing, especially for me, was a little continuity reference that they threw in. It’s a reference back to the very first Doctor Who story I watched in 1984 with Peter Davison as the Fifth Doctor. The episode is called, “The Visitation.” In it, the alien threat inadvertently caused the Great Fire of London, which the Doctor warned Me about in this episode.

J: Kudos to the writers to be able to keep all of that history straight, just so that they can then pull in those references like that.

B: I think it comes from the fact that after 50 years, it is the die-hard Doctor Who fans that are actually running the show now. It is those kids who watched the show in their parents’ basement when they were 6 and 7, who had an entire life of being a hardcore fan and studying the minutia of the program. With some of these references, I get a kick out of trying to decide if it was something that Moffat threw into the script or if it was something Capaldi brought to the table in an ad-lib moment. You’ve got two of the most knowledgeable people about Doctor Who in the world, and they’re the writer/producer and the star of the program.

J: At the end of the episode, we see Clara return. She comes over and gives the Doctor a big hug from behind. That seems like a whole different level of intimacy than what I recall seeing with any of the other companions before.

B: That’s primarily because Clara has been through so many important moments in the Doctor’s life – regeneration, meeting his other selves in the 50th Anniversary, jumping into his timeline to fix everything at one point. In the Capaldi season that you missed, one of the staples of that first aspect of this regeneration was he kept telling her that he’s not a hugger, that this incarnation does not do hugs, and every time they would hug, he would look very awkward and out of place. Almost as if he didn’t know how to hug while he was being hugged. I think they’ve traveled together long enough now, and that his character as the Doctor has developed to the point where they can be intimate now. Think of this as a payoff to last season when he absolutely refused to hug.

J: I might make the argument but I really didn’t “miss” the last season…

I will mention the fact that by the time the Clara returned in the last five minutes, I had kind of forgotten about her. I didn’t feel her absence in the episode really.

J: Did I read something that Williams would be returning for another episode?

B: Yes! The very last scene when Clara returns to the TARDIS, she shows the Doctor a selfie that she took with a student. In the background of the selfie was Maisie Williams’ character staring at Clara. That’s a pretty strong hint that she’ll probably return, and probably also figure into the big season finale, I would imagine.

J: You know, if they were really smart, they would start going back and editing her into past episodes.

B: That would be brilliant!

One other thing that I thought was really interesting. At the end, Williams mentioned something about being the patron saint of those that the Doctor had left behind. I get the impression that that would also be an interesting story to tell sometime in the future of all of the different companions that she’s followed up with after their travels with the Doctor have finished. Like a therapist, but not as expensive. I think they can work that into a future episode in a really neat way.

J: So what’s on later tonight for the Doctor?

B: Tonight we have “The Zygon Invasion” which brings back, for only their third appearance in the entire history of Doctor Who, the shape-shifting sucker-covered orange aliens known as the Zygons.

J: When did they first appear?

B: They first appeared in a Fourth Doctor (Tom Baker) serial called “The Terror of the Zygons.” Then Moffat wheeled them back out for the 50th Anniversary special just because David Tennant had always wanted to have an episode with the Zygons, just because they were his favorite as a child.

J: Do you know where the Zygons should appear next? I’ll tell you — it should be in the panels of Brent’s That Time on Doctor Who, your one-stop-shop for your weekly Doctor Who fix!

B: We apply the MST3K riffing-model to Doctor Who, one frame at a time.

J: All right. Come back next week to read our Second Opinion on episode 7!

#ThatTimeOnDrWho is created mostly weekly by Brent Kincade for Word of the Nerd Online! 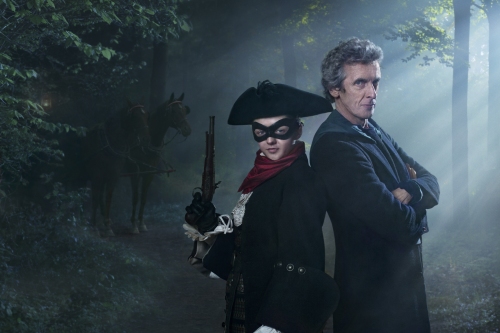 Tags: Doctor Who, Maisie Williams, Second Opinion, That Time On Doctor Who, The Woman Who Lived