Jerry and John had the amazing opportunity to represent the Hero Initiative as the Worst. Comic. Podcast. EVER! up at the inaugural year of O Comic Con! in Council Bluffs, Iowa just across the line from Omaha. Everyone there was absolutely ramped up for the show and we are already excited for next year. We are grateful to the organizers for having us and to both them and Project Nerd for allowing us to host some of the Q and A’s. It was an absolute blast!

The growth of the podcast over the last months and all the new friends that we have made is incredibly gratifying. We have tons of ideas for new content, new games and new fun so be sure to like us on Facebook or subscribe to the podcast on iTunes so that you can keep up with the action!

Here are a few pics from the floor of OCC 2015 so you can get an idea of what we got to see in their amazing opening weekend!

Jerry did a great interview with David Newell aka Mr. McFeely from Mr. Roger’s Neighborhood and hosted his Q and A as well as one with Billy West and Maurice Lamarche. Those two gentlemen are superstars in the world of voice work and you’ll get to hear a bit of their talents on the podcast later! He also hosted Q and A’s with two great comic artists not to mention Walter Koenig – the man that brought Ensign Chekov to life in ST:TOS! 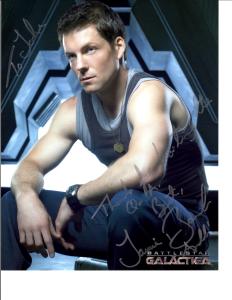 Jerry caught up to Jamie Bamber (most famous for playing Apollo on Battlestar Galactica) for a photo on day 3 and John actually got to help with the Jamie Bamber Q and A. I was the audience microphone guy. While I got bumped from being the primary host, I had a blast and Jamie was very kind to gift me a photo op and a picture. I’ll admit, the British accent is pretty sexy. 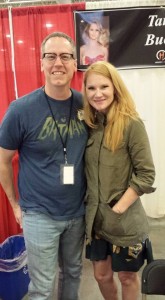 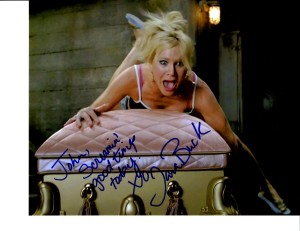 My first panel playing host was for the talented, beautiful and hilarious Tara Buck that thrilled fans as Ginger on HBO’s True Blood. She was incredibly charming and gracious to work with a newbie and I’m very excited that she will be co-staring in the movie Pee Wee’s Big Holiday coming to Netflix later next year! I may be her newest biggest fan. 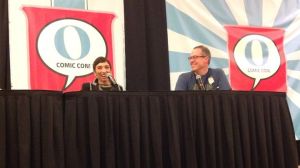 Naomi Grossman just oozes talent. She herself will admit that she is not classic a Hollywood beauty. What she does have is moxie and grace and when the parts weren’t there she made two hit one woman shows and then landed the role of Pepper on American Horror Story seasons 2 and 4. She understands that comedy doesn’t just have to be instant chuckles but instead can provide a framework for a poignant message. We had a lot of fun. Oh and Pepper wants Meatloaf. I also got to join a panel on podcasting organized by Project Nerd. We had the Worst. Comic. Podcast. EVER! along with the Nerdcast, the Modern Sex Podcast and the Two-Headed Nerd Comicast.

And now for the ever popular cosplay photos. I don’t the identity of any of the other folks here but the first pic is our friend Erin Lei aka Red Star Cosplay. Check our her work! 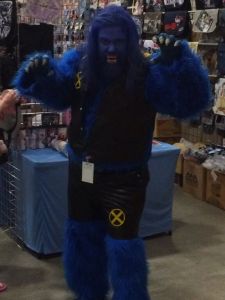 Hope you all enjoyed the pics. Have a suggestion for a convention that the WCPE should attend? Just let us know .. we are willing to go anywhere for our fans!