Today, on a very special episode of the Worst. Comic. Podcast. EVER!, we take the show on the road, as friends and family gather to sit in with us on Cullen’s last live recording in Kansas City (for now at least!).

Gathering at the Peanut on 127th St in Overland Park, Cullen, John,  and Jerry were joined by childhood friends (who have plenty of blackmail on us); friends of the show Hillary Lewis, Jim Lynch, and Ande Parks; and even some of our children. We had that room filled. Big thanks to our waitress Melissa (who goes by the name Utah), who kept the drinks filled throughout the night. Utah will make an appearance on the show midway through, as many patrons were questioning exactly what we were doing in the party room with the microphones. No worries, Utah, we ask ourselves that same question each and every week. 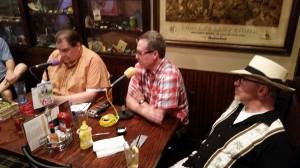 Now, for those of you listening, this is going to sound very different than any of our other episodes. We do talk with the others in the room, which may or may not be captured on the mics. You’ll probably hear some background noise from the bar as people go in and out. And as it was at this time last year, all recordings are done with the Royals game on in the background. (Or rather, the 2015 American League Central division champion Royals game on in the background! October bound!!)

What I know you will hear on this recording is Cullen sharing his adventures at the Rose City Comic Con. Whether meeting creators, buying swag, and being threatened with a cease-and-desist order, things are never dull with Cullen in the picture. We are already making plans for next year’s RCCC (September 10 & 11, 2016). Cullen brought in Weirdworld #4, which features an appearance by the Man-Thing. (On behalf of the Worst. Comic. Podcast. EVER!, we are not responsible for any Man-Thing jokes that may have been shared during the recording of this podcast.)

Of course, we couldn’t pass up speaking to Ande Parks about his recently announced title at Dynamite Entertainment, Seduction of the Innocent. The preview samples of this book look spectacular, and everyone should be buying this book come December.

For those in the local area, Jerry and John will be making appearances at Elite Comics’ We Are Still Batman event on September 26, and at the Free State Comicon in Lawrence, KS, on October 3.

As always, we invite your comments and questions to this podcast or any other topics in the world of comics. Start by posting a reply on the blog. Then go find us in social media on Facebook, Twitter, Instagram, and more.