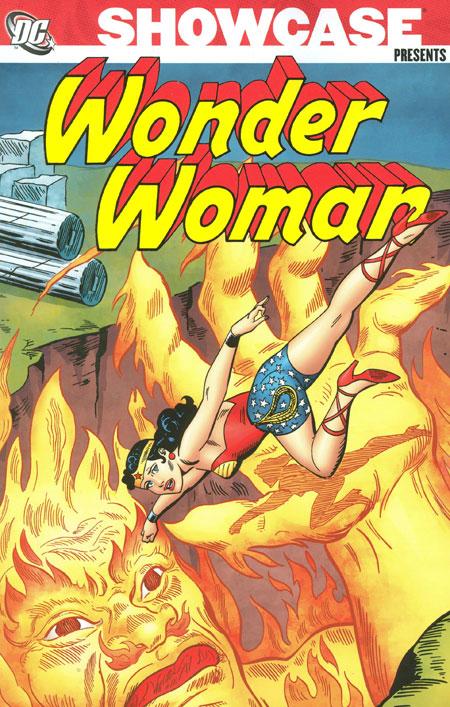 Overview: Beautiful as Aphrodite, Wise as Athena, Swift as Mercury, and Strong as Hercules, Wonder Woman continues her journey as an ambassador of peace to the “Man’s World”.

These stories cover a two-year period in the mid-1960s. Wonder Woman faces a variety of threats, such as the Duke of Deception’s attempts to take over Earth from his base on Mars; the Academy of Arch-Villains competing to take down the Amazon princess; or the mysterious Fisher-Birdmen from another dimension.

The highlight in this volume has to be the first story from Wonder Woman #144, titled “Revolt of Wonder Woman”. Our star has been pushed so much lately that she is running on exhaustion. Between protecting Paradise Island from an attack of flaming characters, saving Mer-Man yet again,  keeping a crashing airplane aloft, and other challenges, Wonder Woman is at her physical breaking point and just walks away from everything in a catatonic state. She breaks out of her stupor long enough to rescue a blind girl by the name of Mary Jane. Not knowing who rescued her, Mary Jane befriends Diana based on her kindness. Mary Jane gets the chance to even the score when her acute hearing picks up a rattle snake in their path, and she steers Diana away. Finally, the two women are caught in a lightning storm. Diana protects Mary Jane with her bracelets, but the lightning flashes burned away the blindness from Mary Jane’s eyes. The two vow to remain friends, yet we never see Mary Jane again.

Why should these stories be Showcased?: You know, I really do try to remain positive about these reviews. There is no need for me to dump all over stories published before I was born. That said, I do not think that these stories should be in a Showcase Presents. The stories are poorly written and very repetitive. A lot of the stories just involve Steve Trevor, Mer-Man, and/or Bird-Man trying to win the hand of Wonder Woman in marriage. They even extend those stories back to Wonder Girl, with a teenage Steve Trevor (still in the military!), Mer-Boy, and/or Bird-Boy competing for Wonder Girl’s affection. When she does fight a villain, they tend to fall into the lame end of the spectrum: Mouse-Man, Multiple Man, Angle Man — see a pattern here? When people argue that female characters are used poorly, it is these issues that are given as examples. Even if you are a Wonder Woman fan, this does not need to be on your bookshelf.

To find the original issues, or reprints, of Wonder Woman, check with your local comic book store. In the Midwest, I strongly recommend Clint’s Comics in midtown Kansas City. Clint’s has been in business for nearly 50 years at the intersection of Main St. and Westport Rd. The back-issue selection is incredible, and what you see in the store is just a small fraction of their total inventory. In addition to the back issues, Clint’s stocks current issues, trade paperbacks, toys, T-shirts, and more. Check out Clint’s Comics to build your own essential collection!