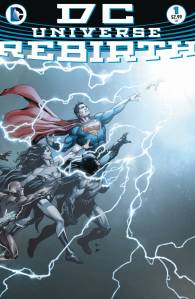 I’m tired of reboots. I mean, I get them. I do. After a long time you can’t explain why Superman is about thirty forever and why Robin is still a teenager even though he is sixty-eight years old.

When reboots happen, characters are added and favorites are lost. Marriages and births and deaths are erased. Or some of them are and others aren’t. It is all a bit confusing. When DC rebooted their universe into the New 52, there were some poor choices. Maybe it was poor planning and maybe it was missteps by the individual creative teams or in picking the creative teams. Maybe it was an attempt at too much shock and awe and not enough reverence for characters that have been around for decades for a reason. And this isn’t just me saying this. Geoff Johns is DC’s Chief Creative officer and at Wondercon earlier this year he stated that things weren’t handled well with that reboot.

Rebirth is not a new name for DC or for Geoff Johns. His Rebirth storylines for Flash and Green Lantern returned Barry Allen and Hal Jordan to the DC Universe after their long (as comics go) deaths. Johns also said that the purpose of each Rebirth was to restore the heart of the original character. He also stated that this Rebirth was to return the spirit of the DC Universe as a whole. This 80-page special was the first part of that process (well sort of after Superman 52 and Justice League 50). So how did this things  work out? Following are my thoughts as I read it along with some analysis at the end. 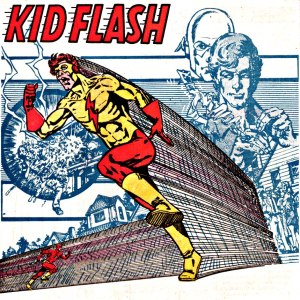 Lost is mostly a history of Wally West, the one time Kid Flash and later Flash. What makes this ironic is that Wally is one of the most referenced missing pieces of the New 52. When this universe started, Flash was Barry Allen and Bart Allen was Kid Flash and there was no Wally West, red-headed, African-American or otherwise. Wally reflects on a watch that was passed down through his family. Perhaps a reflection on legacy, or the Flashes ability to travel through and change time?

In Lost, we find out that Flashpoint, the event that created the New 52, was disturbed by an outside entity. When things were coming together, this entity stole years and relationships and whole people such as Wally from existence. Since that time, this younger Wally has been stuck in the Speed Force, unable to fix the universe or even just to escape. He decides to make contact with the one person that he figures can solve this mystery if anyone can, the Batman. He makes contact but he barely has time to give Bruce a single clue before getting pulled back into the Speed Force. Trapped their again, he is more determined than ever to warn everyone and to remind them of what was lost.

Legacy finds Wally continuing to try to make contact with the missing pieces of the universe. He tracks down an elderly Johnny Thunder and tells him to bring back the Justice Society of America – the World War II era team that ended with the McCarthy hearings. Johnny’s magical Thunderbolt refuses to appear when he says the magic words and everyone thinks he is senile because no one remembers the JSA. Wally tells him they do exist before he disappears again.

We get flashes (sorry) of other characters.

Like the last, this chapter jumps a bit at first.

And finally we are back to Wally. He has found her. Linda Park, the woman that he was married to before the universe all went to hell. She is a reporter trying to find out what happened to Superman and he appears. Out of thin air in a bolt of lightning he appears before her and tells her he loves her and that he can come back if she will just take his hand. She can pull him out of the Speed Force. She tells him she doesn’t remember him and is pulled agonizingly back.

More scenes cut through with Wally flying through the speed force. New Gotham heroes, Swamp Thing and Constantine, Captain Boomerang, Cyborg, Nightwing. And then the new Kid Flash. Wally’s cousin also has speed and Wally is pleased to see a family member ready to take on the mantle if he cannot.

Wally is then able to hold together long enough to find Barry and appear before him. Barry does not remember him at first and Wally realizes this is the end. He has just enough energy to deliver some final comments. A goodbye to his life. But in the nick of time, just before it evaporates completely, Barry remembers and pulls Wally back. Wally reveals that this is not all Barry’s fault. It is something or someone else. Something more powerful then they have ever faced. He believes that these efforts were designed to weaken the DC heroes. The coming conflict is going to be between love and apathy, hope and despair, and faith and disbelief. All this time we see Batman finding something embedded in the wall of the cave.

What Batman finds is the Comedians blood stained smiley face pin from The Watchmen.

We pull away from Earth and close in on Mars. There we see what appears to be Wally’s wristwatch. The pieces of the watch float apart, are seemingly repaired, and are then restored. There is a voice over in a very familiar font and color scheme. “Nothing ends Adrian. Nothing ever ends.”

The watch face transforms into a clock face. The most famous clock face in the history of comics. The tagline on the page: The Clock is Ticking Across the DC Universe!

The next two page is a splash features many of the heroes of DC with some old friends returned and some new heroes as well. Donna Troy, Wally, Raven, Ted Kord, a new Shazam Family, and many others and (get this) they are smiling. Smiling!!

Take my childhood heroes. Remove the hope and the joy and what you might call naivete and what are you left with? The answer is Watchmen. Watchmen was revolutionary. It changed the way we all thought comic stories could be told and the type of stories that could be told. It’s success and critical acclaim led others to follow however. The Dark Knight Returns, The Killing Joke, Batman: Arkham Asylum started taking us into darker and darker places. More and more often there was no joy to be had.

Don’t get me wrong. There isn’t anything wrong with Watchmen. It was a phenomenal and powerful story. I just don’t think that the entire DC Universe should not have followed that model. The New 52 completely doubled down on the depressing mood. It was like someone went around with a wand and intentionally denied every character happiness. Then they went to the DC movies and did the same thing.

None of this is Alan Moore’s fault. Moore doesn’t run DC and I don’t think he even talks to them so this is in no way his fault. I do feel though that the beginning of this depressing path for DC started with that series. If DC is to change their ways, then they need to un-Watchmen the DC Universe.

Rebirth. I like it. Let’s keep it moving UP, UP and AWAY!