Home › John › Comic Time Warp – What Would Aquaman Do?

Comic Time Warp – What Would Aquaman Do?

With Season 4 of Arrow starting soon, the producers of the show will be looking for new ideas or at least very old ideas that no one has seen in awhile. Maybe, they will look at this back-up story from Adventure Comics #267, Dec 1959: Story by Robert Bernstein and pencils by Lee Elias. I actually found it reprinted in World’s Finest #145 from Nov 1964.

In this issue Oliver Queen (Green Arrow) and Roy Harper (his sidekick Speedy) go after a former adversary, The Wizard, who has decided to head to sea to avoid a rematch with GA. The duo adapt their crime-fighting activities likewise including new weapons and the Arrow Boat. For some reason, they ride around in the Arrow Boat without costumes or masks. 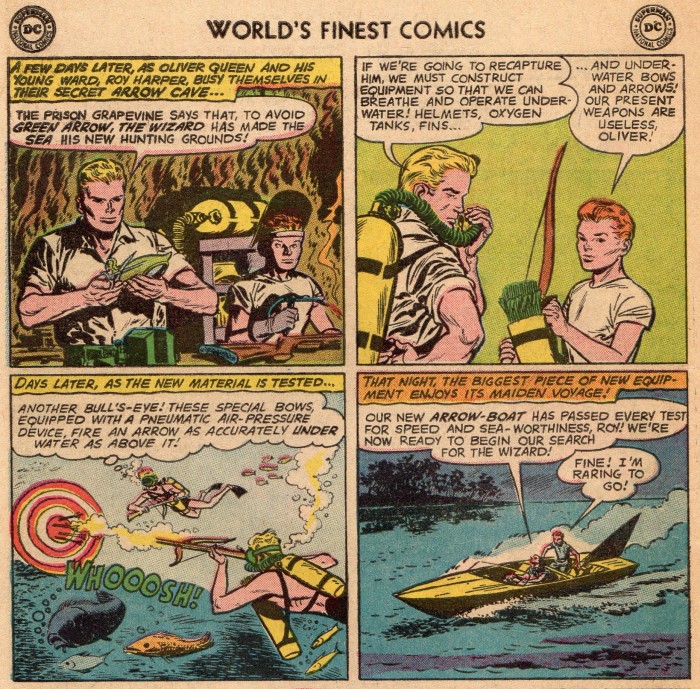 Their villain is a wizard with technology (thus his name) so he creates a submarine disguised as a whale but our colorful archers foil his plans although he escapes. In their next encounter, the Wizard is in a hollowed out iceberg. As you can see below, things have become truly desperate. GA actually gets to the point where he thinks, “What would Aquaman do in a situation like this?” Apparently Aquaman would carry pickaxes and shovels because they are frequently used in underwater adventures.

Salt arrows. They aren’t even shaped like actual arrows. They look like signs directing you to a garage sale.

I’m not sure that I would call the hours long gradual melting of an iceberg ‘havoc’ but we do try to keep things dramatic. I also like how the captain of this rowboat can identify the men coming out as convicts. Was it that obvious?

To find out if this is the plot of a new episode of Arrow and to keep up with all your favorite shows be sure to check out WCPE TV with a schedule of all the new episodes of super-heroy shows on the telly all season long!