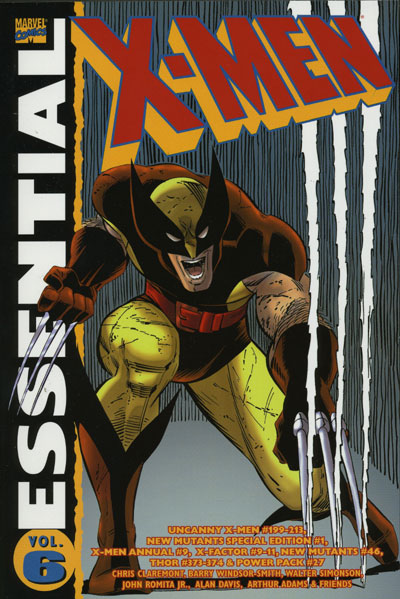 Overview: Welcome back to the ongoing adventures of the students of the Xavier School for Gifted Children, led by the headmaster Magneto. Wait, what the?!? Magneto leading the Xavier School? What is going on here?

Once again, Chris Claremont introduces one change after another in the newest Essential X-Men volume from Marvel Comics. Magneto is brought before a world court to face charges for his actions back in Uncanny X-Men #150 (see Essential X-Men Vol. 3 for that story). During a battle, Xavier is gravely injured and is taken away by Lilandra and the Starjammers for treatment, leaving the reluctant Magneto in charge of the school. At that same time, the powerless Storm defeats Cyclops in a Danger Room fight to determine the leadership of the X-Men. Cyclops, his wife Maddie, and their son Nathan opt to leave the team behind and try to start a new normal life. That plan gets derailed later in the pages of X-Factor.

The highlight of this volume is the Mutant Massacre, which spread out into other Marvel titles such as New Mutants and X-Factor. The bulk of the Morlocks were killed by the Marauders; The Angel’s wings were badly damaged when he was pinned to a wall, leading to his wings needing to be amputated. Colossus, Nightcrawler, and Shadowcat are all severely injured and leave the team – this leads to the later creation of Excalibur. A new member joins the team in Psylocke. And we are treated to a nasty dogfight between Wolverine and Sabretooth.

The art in this volume is just stellar. In addition to the talents of John Romita, Jr., the ongoing series artist, we are also treated to art by Arthur Adams and Barry Windsor-Smith.

What makes this Essential?: If you like your X-Men to be EPIC, this is the volume to pick up. Between the finale of the Asgard arc that started in the previous Essential to the Mutant Massacre that crossed over with New Mutants, X-Factor, Thor, and Power Pack, this covers all aspects of the team’s greatness. In addition, Rachel Summers becomes Phoenix, the future Cable is born, and Psylocke joins the team. These stories are the ones that drove all of the various X-Men storylines of the 1990s. If you have not read these stories yet, this is the most affordable way to read all of the issues at one time.

To find the original issues, or reprints, of Uncanny X-Men, check with your local comic book store. In the Midwest, I strongly recommend Clint’s Comics in midtown Kansas City. Clint’s has been in business for nearly 50 years at the intersection of Main St. and Westport Rd. The back-issue selection is incredible, and what you see in the store is just a small fraction of their total inventory. In addition to the back issues, Clint’s stocks current issues, trade paperbacks, toys, T-shirts, and more. Check out Clint’s Comics to build your own essential collection!