I love comic shops. I love the comics, the people, the art, and the unique layout and feel of each store. I love talking to people about the stories and artists that got them into comics in the first place. During the winter holiday, my family and I visited San Francisco and on one glorious day, my wife and daughter walked through several neighborhoods and visited four comic shops. Here is a little bit about each of these holy sites and what we saw.

The area in the map to the right shows the path that we walked which makes a roughly square shape about one mile on a side. We actually then closed up the square to get back to Market street and the F-line street cars to head back downtown. Isotope was our first stop as it was the closest shop to downtown and only a few blocks from the subway that runs under Market street. The walk from Isotope to Comix Experience involves a pretty steep hill (for Kansas … certainly not for San Francisco) as does the subsequent walk to the Whatever Store. We hadn’t quite mastered the bus system at this point so we decided to take the trip by foot and while it was cold for California, the sunshine kept us warm and kept us moving.

If you love comics and you are heading to San Francisco, people want to know if you are heading to Isotope. This shop and its owner James Sime are known for their unique style and flair and in person they certainly don’t disappoint. The shop has the kind of funky feel that you might expect from a place in San Francisco and this joint is known for funky events and parties as well as collectors stopping in the pick up issues from their pull list. They feature regular in-store events with some of the biggest names in the comic industry and you just never know who might decide to pop in for a surprise visit. 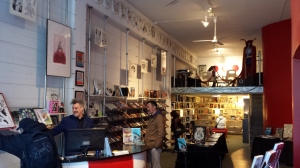 From the moment that you walk into Isotope, you definitely get a funky vibe.

Owner James Sime rocks the hair gel. A bartender and comic shop owner … that is a pretty sweet combo.

Besides books from the big publishers, Isotope has a large collections of Zines from independent creators. You don’t see that nearly as much around here. 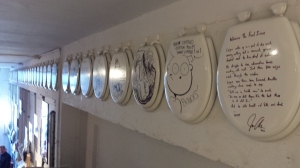 Isotope’s unique collection of toilet lids with art by everyone from Darwyn Cooke to KC’s own Jason Aaron.

Isotope is one of the least cluttered shops I’ve ever been in. Many shops feel almost like warehouses with barely enough room to move around. Stores are frequently looking to fill every square inch of your visual field with as much product as possible. Rarely have I been in a shop in which someone could actually sit down and read something. In fact, Meg and Miranda sat upstairs and looked at zines while I peeked around. As someone that has frequently wanted to find a place to sit while my wife has shopped, I was very appreciative that the girls could take it easy while I got to take in the whole store. If I was looking for recent issues or a unique collection of books and trades than I would love to have Isotope in my neighborhood. If I was looking for a big selection of in-store back issues, statues and a ton of specific trades, then I might head somewhere else. While I was looking around, I saw James interacting with customers and helping them find what they were looking for. He was even willing to direct them to another store if he thought it might have what the customer wanted. I don’t think I’ve ever met a store owner that was any more engaging and helpful than James. As we prepared to make our way to the next shop, James helped us orient to the neighborhood and how to correctly find our way.

Comix Experience was our next stop. The shop was more traditional than Isotope but it still had a lot of space to move around which is nice for signings and other events like Free Comic Book Day. While the ‘New Comix’ rack was clearly marked, I found the organization wasn’t immediately logical. The books aren’t sorted by title or publisher or writer or in any way that I could immediately discern. Perhaps the idea is that in searching for the books you want you will see other books that attract your interest. The store has a a wide collection of recent back issues and a very large collection of trades. Many of the trades were organized by particular creators more like the fiction section of a library rather than by title which is traditional. I actually liked this as I may know that I want to read other books by Mark Millar or Scott Snyder but I may not know the title of each book. The shop also had a large collection of books from smaller publishers and graphic fiction and non-fiction that didn’t revolve around superheroes or science fiction. This is again something that we don’t see nearly as much of here in the Midwest.

My lovelies in front of the Comix Experience!

The New Comix rack. You can tell that the books are edgy when they use an ‘x’ at the end.

Recent DC and Marvel back issues

My lovely wife checking out the zines. She has been inspired to create her own. I may be interviewing her soon!

My only real complaint about the shop was that the store manager was in no way interested in having a conversation. I asked him if he was the owner and he stated that he was “just the manager” and wasn’t that interested in engaging with us. When I stated that I was having trouble finding a particular new issue he seemed a bit annoyed to disengage from his phone and show me where it was. Admittedly it was there and I overlooked it but I didn’t think it was a crazy question, especially given the lack of an apparent organizational system on the shelf. Just to clarify, we were the ONLY people in the store so it wasn’t like we were distracting him from another customer. Now maybe he wasn’t supposed to be working that day or had a flat on the way to work or a million other reasons why someone might be having a bad day, so realize that this was just one experience on one day. Online reviews of the shop are very positive so I wouldn’t let this discourage you from visiting a great shop. 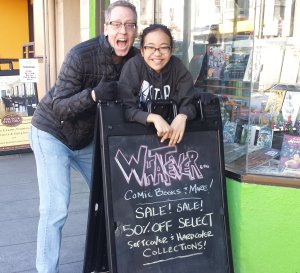 That is a concentrated bit of comic entertainment! 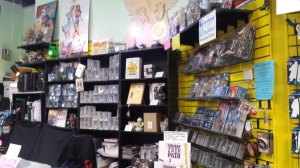 The Pop Vinyl figures … I so wish I had invested in that company a few years ago.

Heading south on Divisadero St. from the Comix Experience, you will go uphill for awhile before you angle off onto Castro Street. Castro takes you downhill back and once you cross Market you are in the Castro district of San Francisco. I was not aware ahead of time that this community is well known as a gay neighborhood but it isn’t subtle when you approach. Rainbow flags and crosswalks as well as a walk of fame with plaques dedicated to well known gay and lesbian historical figures and activists should tip you off. Interestingly shaped cookies at the local bakery and other products in the windows may make some folks uncomfortable. Personally, Meg and I were excited to see people free to be themselves and we were proud to walk around with our daughter and we were made to feel welcome everywhere we went.

As we walked into Whatever, we were greeted by Rich, one of the owners. He let us know right away that we should let him know if we had any questions or needed help. While I looked around, Rich was helping a customer that was looking for some books to read but wasn’t seriously into comics. Rich gave him some great suggestions for fantastic reads that didn’t require a massive knowledge of continuity (mostly image books). Miranda also really liked that he was wearing S.T.A.R. labs gear just like her. Rich also loved talking comics as he and I discussed some recent issues that we enjoyed and others that we weren’t too sure about. He was very generous with his time and we had a really great chat while Meg and Miranda did some shopping and walked around the neighborhood.

The store was filled to the gills with comics with new issues being clearly marked. The store also had a large collection of trades, statues, posters and other comic related merchandise. If you had more than 10 people in this store it would start to feel crowded. Most of the stores we went into in this area were compact and I suspect that it is some expensive commercial property. By far my biggest complaint about the Whatever Store is the name. I was a bit concerned that we would get there and they would have a few comics in the corner and a bunch of other stuff all over the place. If I ever open a shop as dedicated to comics as this one, I would definitely put the word ‘comics’ in the name.

Also, be sure to check out their podcast: The Geek Chat! Just don’t forget to come back to the Worst Comic Podcast EVER!

Bearing back towards the east to our final destination we passed Mission Dolores for which this district is named. This section of the city has an extensive Latino population and cultural influences, although like all sections of San Francisco, don’t be surprised to find a little bit of everything. 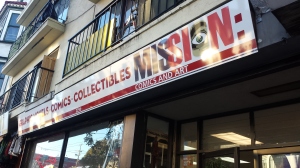 I love the logo and sign for the shop.

Hush is the name of a character. You don’t actually have to be quiet here.

The display felt a bit haphazard but there was a ton of great stuff to behold.

Artwork on display along with some suggested reading

Mission: Comics & Art was a wide open store with a lot of space and a lot of product. New issues were available along the back wall separated by release date (this week, last week, 2 weeks ago, etc.) while a very large display of trades were around the edges and on shelves in the middle. If you were looking to bring some specific books home to your collection, this would be a great place to do that. The front of the store had a rack of fun original T-shirts and a couch to sit on. The store had a lot of cool art on display but the organization could use some work in places. The southern wall of the store had around a dozen cardboxes on the floor and I wasn’t sure if this was product or things that hadn’t been put out yet or things that they had just purchased. It was a bit confusing.

Store owner Leef was very open to conversation and very friendly. He was helpful with customers trying to find things while also manning the cash register. His shop had the most traffic of all the ones we went to, but that could also be a product of the time of day and the fact that the neighborhood also had the most foot traffic along the street. I find that different shops do more business at certain times of the week and this could be no exception. Miranda was excited that she was able to get the Rey Bobble Head Pop Figure!