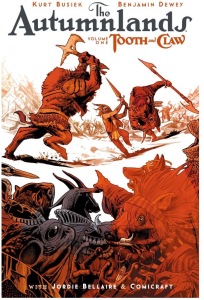 Kurt Busiek’s comic writing career spans three decades, and his writing prowess is only matched by his prodigious output. His professional portfolio includes notable and lengthy runs on a wide variety of titles for publishers such as Marvel, DC/Wildstorm, Dark Horse, and Image. He has created entire tales in the spaces between some of the most iconic comics from the Silver Age with Untold Tales Of Spider-Man artist Pat Olliffe. DC thought so much of his skills they let him craft The Power Company from whole cloth and gave the concept an 18-issue run. In 2003, Kurt was given the reigns to start a new Conan series at Dark Horse Comics with illustrating super star Cary Nord.

What he does for existing properties by broadening character sets and creating rich, compelling stories pales in comparison to what he does when given no arbitrary boundaries and limitless possibilities. Busiek, Brent Anderson, and Alex Ross have been consistently delivering tales from Astro City since 1995. Their teamwork and shared vision have paid dividends in both quality and awards. Twenty years and multiple Eisner Awards later, they are still producing some of the finest super-hero stories in the medium today. Busiek also collaborated with current Star Wars artist Stuart Immonen in 2000 for the series Shockrockets from Gorilla Comics. Despite the series being short lived with no additional content being created after the first story arc, multiple publishers have reprinted the work in it’s entirety due to it’s popularity and quality.

I had the opportunity to talk to Busiek about some of these books at Rose City Comic Con in Portland, OR, this past September. After a few minutes of me fanboying all over him, I finally began to run out of air, so with my last breath I asked him a question, “Do you ever write for yourself?” He pointed to the Autumnlands trade paperback on his convention table, “Everything I write is for me.”

What Busiek has written for himself, and what we get to enjoy, is his latest world building effort. Autumnlands is a new series this year from artist Benjamin Dewey, color artist Jordie Bellaire, and Busiek, and is published by Image Comics. Busiek said he wanted to write a Kamandi story without the interruptions of editorial-forced crossovers. After reading the trade and the most recently released seventh issue, I believe the team has succeeded in delivering on his vision. Part Legends Of The Guardians and The Lord Of The Rings, Autumnlands is a story made up of magic and myth. A group of wizards have convened to draw forth a great champion through time, but their desires are met with catastrophic consequences leaving their very survival in doubt. Dewey has a great talent for anthropomorphism and his battle sequences are tight and believable. There are multiple double-page spreads in each issue, and the backgrounds in each panel are rich with detail. Bellaire has been finishing the look of the series with her awesome color palettes, and in my opinion, pulls the work of her teammates together to set the tone for the book. This trio is as good a team as any Busiek has worked with, and I anticipate another lengthy run and multiple awards in the future for the series. You can pick up the first six issues in trade paperback form, and the first issue of the newest arc is in shops and available digitally now.

The Worst. Comic. Podcast. EVER! is proudly sponsored by Clint’s Comics. Clint’s is located at 3941 Main in Kansas City, Missouri, and is open Monday through Saturday. They are having a Black Friday sale beginning this Wednesday and you can get giant discounts on the things your favorite geek needs this Christmas. Owner Jim Cavanaugh and his friendly and knowledgeable staff can help you find whatever it is that you need. You should also know that Clint’s has the most extensive collection of back issues in the metro area. If you need to find a particular book to finish the run of a title, head on down to Clint’s or check out their website at clintscomics.com. Tell them that the Worst. Comic. Podcast. EVER! sent you.