Well, I’m going to try a new feature on the site this week. I want to provide some quick reviews of comics I have recently read. I generally read the books about 2-3 weeks within their release date, so I would hope you could still find them on the shelves at your local comic shop. Every now and then, I’ll throw in an older back issue when I dive into the To-Be-Read pile.

After being blown away by how awesome Archie #1 was earlier this summer, this is the one comic I have eagerly been waiting on. And it did not disappoint! When we left last issue, Archie and Betty are on a break. But like any good couple, they still have feelings and emotional attachments to each other. As always, Archie is broke and finds himself going through multiple jobs, with little success. Betty gets ready to celebrate her birthday, but finds that potential dates just don’t compare to her last boyfriend. And we are teased about a new family moving to town, the Hodges. Mark Waid once again delivers a great story, giving us a modern take while remaining true to the classic origins of the characters. Fiona Staples’ art shines with a fresh look to the familiar faces of Archie and his friends. This is an all-ages book, but do not interpret that to mean it’s just for kids. This is a story that works on multiple levels for all readers. 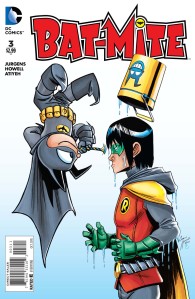 It’s a little embarrassing to admit this, but I have always been a fan of Bat-Mite. I was first introduced to him on the late 1970s Saturday morning Batman cartoon. For the longest time, I thought Bat-Mite was just a creation done for the cartoon — I blame H.E.R.B.I.E. for that. It was only much later that I realized he was a creation from the 1950s comics, when all of the major characters had to have a magical imp creature to cause havok for the hero. Superman had Mr. Mxyzptlk, Aquaman had Qwsp, Martian Manhunter had Zook, and so on. Regardless, Bat-Mite is a character I will gladly pick up. Dan Jurgens is telling a fun story here, as Bat-Mite jumps around the DC Universe encountering many other heroes besides Batman. In this issue, Batman’s #1 Fan finally gets to meet the way-too-serious-for-his-age Damien Wayne, who would like nothing more than to rid the universe of our title character. Corin Howell’s art is decent, but I personally prefer Bat-Mite to look more cartoony or animated contrasted against a more realistic set of other characters. Howell presents all of the characters on the same illustration level, if that makes any sense. We are halfway through this mini-series, so there is still time to catch up on it. 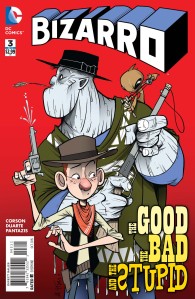 This should go without saying, but I’ll say it again. Comedy is hard. Very hard. Harder than you realize. Whether you are trying to share a joke among friends or set up a punch line, it takes timing, inflection, and precision to make the moment work right. It’s even harder to put it down in writing, and illustrate it as well. With all of that said, this book is comedy gold. This is another six-issue mini-series from DC Comics, which involves Jimmy Olsen and Bizarro on a road trip across America. For once, Jimmy Olsen comes across as the sane person in the conversations. This issue brings them to an old west ghost town, where they meet up with Chastity Hex, a bounty hunter and distant relation to the famed DC bounty hunter Jonah Hex. As you can imagine, the group meets up with a set of ghosts, which leads to all kinds of hi-jinx, in particular when the ghosts try to possess the mind of Bizarro. Thankfully, the ghost version of Jonah Hex shows up to help round up the ghost rustlers, and gives us my favorite comic panel of the last week. This book makes me laugh each and every page — AS IT SHOULD!!

I’m sure we have all faced that point in our lives when looking for a good job,  we ask ourselves, “What am I willing to do for money?” Will I work overnights? Will I wear a uniform? Will I ask if you want fries with your order? Or even, will I work for a known terrorist organization? If they provide good benefits and a vacation plan, then the answer should be yes. Meet Hank Johnson, an average guy just trying his best to support his family on a Hydra lackey salary. He has the same issues as anyone else — managing the wife and kids, attending school functions, and hoping to survive encounters with Nick Fury. Much like the fan film “Troops” from 20 years ago, this is an entertaining look at working for the bad guys while working for the weekend. Sadly, this is just a one-shot issue, part of the Secret Wars event, but it is still worth picking up. 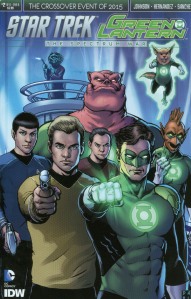 Fresh off the successful Star Trek/Planet of the Apes crossover, Mike Johnson and company challenge the crew of the Enterprise to boldly go into the Blackest Night. For this story, Hal Jordan of Sector 2814 is brought into the future, where Captain Kirk and his staff have found the remains of a dead lantern. We have a full set of lantern rings crossing the galaxy to find new bearers – some rings find homes on the Enterprise; one ring heads to the Romulan home world; and the yellow ring unites with a Klingon captain. And yes, if there is a yellow ring involved, you can imagine who else shows up at the end of this issue. IDW has been doing some great work with the Star Trek properties over the last decade, and this is right up there. Take note, there are multiple covers for each issue. I got the cover from Paul Pope; it’s a great looking cover, and I should be happy with it. But then I saw the other cover (pictured here) by Darick Robertson…. Wow, that’s an incredible cover. Anyone want to trade me copies?

OK, before you leave, I want to give you a quick reminder of what we did last week, and what we will be doing this week!