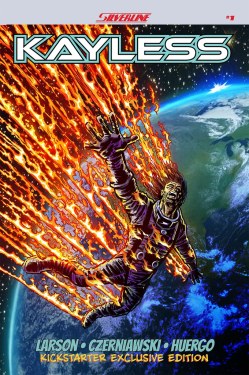 We love comics and we love creators who take their visions and dreams and bring them to life outside of the traditional publishing processes. For example, our good friends at Silverline Comics have a new Kickstarter going for Kayless.

Kayless is a science fiction / superhero / government conspiracy drama in a beautiful full-color 22-page standard format. The Kickstarter is for issue #1 of a five-issue series, and the campaign runs until July 9.

In 1967, Scott Anders rocketed into space on a secret, CIA-sponsored mission referred to as the Kayless Project… to investigate an astronomical anomaly known only in the darkest corridors of the U.S. Government. Three days later all communication ceased. The project, seen as an embarrassing and costly failure, was erased from history and forgotten.

Until today, when Scott mysteriously plummets to earth and emerges, unscathed, and hellbent on one purpose… to return to the anomaly in space. Why does he want to go back? How did he gain his new invulnerability? And what is the mysterious organization that stands in his way, determined to protect the secret of Kayless at all costs?

Now we know what you are already thinking. How do I know I will get my book if I place an order? Easy, Kayless #1 is already done, and the project is already fully funded. But just because the project is funded doesn’t mean you overlook this comic. Take a look at the project page and get your pledge in today!