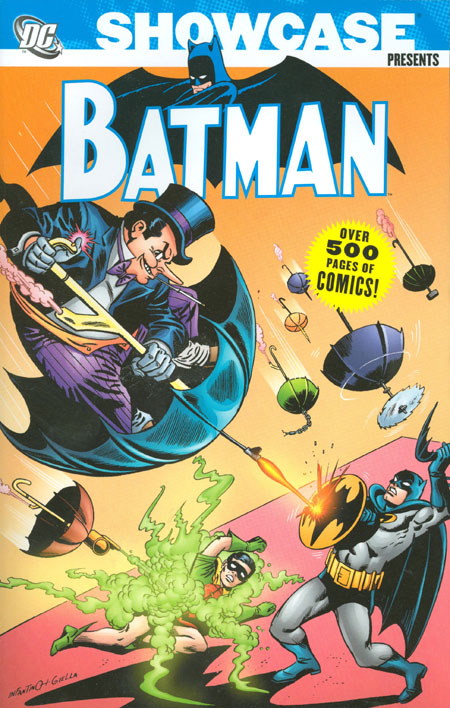 Overview: “Atomic batteries to power. Turbines to speed.” Strap in, old chum, as we travel the 14 miles into Gotham City. Wait, that’s the wrong Batman series from the 1960s. I was referencing the Batman TV series. Surely the TV series had no impact on the comic books, right? Wrong! Sit back and enjoy the ride with the third volume in the Showcase Presents Batman series. There’s not a moment to lose!

Now, according to lore, the TV series producers went to DC Comics looking for help. The show needed a new female character to help attract female viewership. Based on a suggestion by William Dozier, DC artist Carmine Infantino whipped up a design for Batgirl, a.k.a. Barbara Gordon, Gotham City librarian, and daughter of Police Commissioner Gordon. Making her debut in Detective Comics #359, Batgirl quickly became a fan favorite and a core member of the Batman Family.

Reflecting the success of the TV show, the comics in this volume started featuring many of the colorful characters to challenge the Dynamic Duo. Lots of Penguin and Joker and Catwoman stories here! And even though they never made it to TV, Blockbuster and Scarecrow get some page time in this collection.

While we start to see some signs of an over-arching storyline starting to develop under the guidance of editor Julie Schwartz, these stories remain primarily one-and-done and could be read in any order once you read Batgirl’s first appearance at the start of this collection.

Why should these stories be Showcased?: This is the volume everyone wants when you think of Batman in the mid-1960s. You get the million dollar debut of Batgirl. You get the second appearance (and the first in Showcase Presents) of Mr. Freeze. Batman’s rogues’ gallery of colorful characters (pun intended) is all here: Joker, Penguin, Catwoman, Riddler, Mad Hatter, Blockbuster, Scarecrow, Killer Moth, and more. As a fan, I would be hard-pressed to find something missing from the Batman mythology that is not contained somewhere in this volume. This may be volume three in the series, but I would rank this #1 on my must-own list.

The Robin story from Batman #192 is also reprinted in Showcase Presents Robin the Boy Wonder Vol. 1.

To find the original issues, or reprints, of Batman and Detective Comics, check with your local comic book store. In the Midwest, I strongly recommend Clint’s Comics in midtown Kansas City. Clint’s has been in business for nearly 50 years at the intersection of Main St. and Westport Rd. The back-issue selection is incredible, and what you see in the store is just a small fraction of their total inventory. In addition to the back issues, Clint’s stocks current issues, trade paperbacks, toys, T-shirts, and more. Check out Clint’s Comics to build your own essential collection!