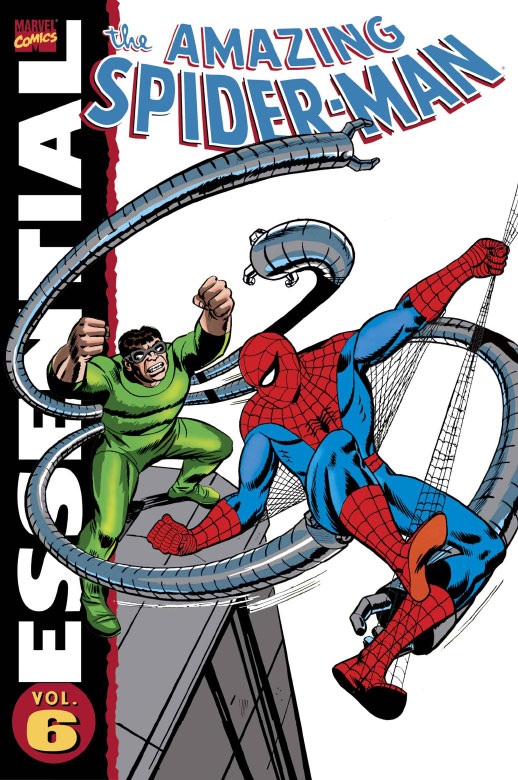 Overview: Peter Parker is pushed to his limit physically and emotionally  in this volume. And when Peter is at his breaking point, the Amazing Spider-Man is at his best.

As if battling Doctor Octopus, the Hulk, and Dracula was not enough, Spider-Man faces down the Green Goblin, who kidnapped and killed Peter’s girlfriend, Gwen Stacy. Spider-Man fights Norman Osborn for what we think will be the final time, as the Green Goblin is accidentally killed by his own goblin glider. Of course, that still does not stop J. Jonah Jameson from accusing Spider-Man of murder.

Spider-Man meets up with a new set of heroes that represents the spirit of the 1970s. Hero for hire Luke Cage is retained by Jameson to bring in Spider-Man dead or alive. The Punisher places Spidey in his targets after reading one too many Daily Bugle editorials about the supposed crimes of our star. Finally, Spider-Man teams up with Shang-Chi, the Master of Kung-Fu, who uses his martial arts skills to thwart the mad schemes of his father.

This volume ends with the debut of a new Green Goblin, who is seeking revenge on Spider-Man for the death of his predecessor. Spidey quickly realizes that this new Goblin is one of his best friends, Harry Osborn, creating a whole new set of problems for Peter.

What makes this Essential?: This should be a must own for many reasons. For character introductions, we meet the Man-Wolf, the Jackal, the Tarantula, and, perhaps most importantly, the Punisher. Even though he was exaggerated to comic proportions, the mission of Frank Castle could easily be replicated in real life. At the same time, we witness the most tragic event in Peter Parker’s life since the murder of his Uncle Ben. The death of Gwen Stacy came with no warning, no lead-up, no spoilers. It changed Peter, and it changed the tone of the book. My feeling is that between the death of Gwen Stacy and the introduction of the Punisher, Marvel left the Silver Age of comics and entered the Bronze Age. These stories should be part of any collection.

The magazine experiment ended with issue #2. However, in the 1970s, Marvel got back into the magazine business with their then owner Curtis Publishing. Curtis helped distribute a wide range of black-and-white horror magazines with content that might not have passed the Comics Code Authority at that time.

Footnotes: In Amazing Spider-Man #130 (March 1974), the infamous Spider-Mobile makes its debut. According to interviews with Gerry Conway, a toy executive had approached Stan Lee and suggested that all of the characters should have some kind of vehicle to use. Lee readily agreed, knowing that he wouldn’t actually have to write the story. When Conway pointed out the flaws in the idea, Lee said he didn’t care what Conway did with the car once it was introduced. As a result, the Spider-Mobile soon ended up at the bottom of the Hudson River. Despite that, Spider-Mobiles can still be found included in nearly every line of Spider-Man toys since then.

To find the original issues, or reprints, of Amazing Spider-Ma Aquaman, check with your local comic book store. In the Midwest, I strongly recommend Clint’s Comics in midtown Kansas City. Clint’s has been in business for nearly 50 years at the intersection of Main St. and Westport Rd. The back-issue selection is incredible, and what you see in the store is just a small fraction of their total inventory. In addition to the back issues, Clint’s stocks current issues, trade paperbacks, toys, T-shirts, and more. Check out Clint’s Comics to build your own essential collection!