OK, before anyone says anything, I will lead off and admit that I picked three Marvel titles this week. That’s how it works sometimes. If you watched my video last week, you’ll see that I got a lot of books from Marvel in my most recent shipment from DCBS. I have read Archie, which I am happy to talk about any week, and Rachel Rising, which I am holding back commenting on until the final issue comes out next month. I still need to read Star Trek and Batman/Teenage Mutant Ninja Turtles, so I can’t comment on those. So I am left with various Marvel books to discuss. Some are better than others, and I am focusing on three of them this week. As always, I would love to find out what you have been reading lately, so leave me a comment and recommend a new title for me to be reading. Or if you don’t want to leave me a comment, come see me in person. You can find me at the Lebanon MEGACon on April 30 and May 1 in Lebanon, MO, or you can see both John and myself at Clint’s Comics for Free Comic Book Day on May 7. 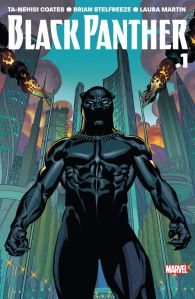 Prior to making his big-screen debut in Captain America: Civil War next month, Marvel has given the Black Panther his own ongoing book again. In an intriguing move, Marvel has recruited Ta-Nehisi Coates, a writer for The Atlantic where he covers politics and culture. Along with veteran artist Brian Stelfreeze, they have created a fresh take on the Black Panther character that builds off of all of the past interpretations of the character. The Black Panther we are all familiar with, T’Challa, is once again the king of Wakanda. But his country has changed. No longer do the people blindly accept the word of their monarch. T’Challa must reclaim his heritage and his throne in the midst of the chaos. There is plenty of intrigues, in particular around the Dora Milaje, the royals guards of Wakanda, who may be working for their own agendas. I am really curious to see how this new Black Panther title develops in the months ahead. 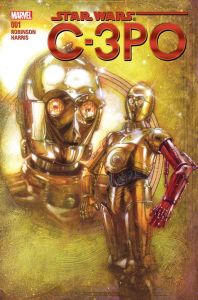 Much like the Poe Dameron issue that I reviewed two weeks ago, this comic would have been better received if it came out back in December. However, unlike Poe Dameron, this stand-alone comic was scheduled for a December release. It was in the October 2015 solicits for release in December. I haven’t heard why this book was delayed, but I am glad it has finally reached my hands. When we first saw C-3PO in The Force Awakens, he reminded Han Solo (and the audience) that we might not recognize him because of his red arm. Well, we find out in this stand-alone comic why his arm is red. C-3PO and a collection of other droids are in an escape pod that crash-lands on a barren but threatening planet. The droids work together to reach help to get back to the Rebel fleet, but they are picked off one-by-one. In the end, a prisoner droid sacrifices his existence in order to let C-3PO survive. Our protocol droid takes a limb from his fellow droid as a way to remember his sacrifice. This is a decent one-shot that helps fill in some of the story details, but it is not overly critical to know in the new ongoing Star Wars universe. 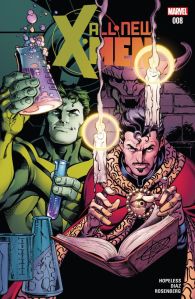 Hank McCoy is suffering from a crisis. He is questioning his belief in science and logic. Nothing seems to be working for Hank. The original X-Men from the past have been brought into the present in a hope to calm down the mutant fervor over the actions of Cyclops. But the young X-Men have struggled, recently getting their collective butts handed to them by the Blob and Toad.   So the Beast seeks out the help of Doctor Strange, the master of the mystic arts, because if you can’t put your faith in science, maybe it’s time to try magic. Hank teams up with Strange, who is attempting to stop a biblical-level outbreak in Idaho. Beast learns that there is still plenty of science to be found in magic, and regains his confidence. This is a wonderful stand-alone story from Dennis Hopeless and Paco Diaz, but it still ties into the ongoing storyline.

Finally, as you may have noticed, we are having an issue with the WCPE page on Facebook. We are working with Facebook to resolve the issue, and we thank you for your patience. As always, you can reach out to us via the website, Twitter, Instagram, e-mail, or even direct message any of us to our personal Facebook accounts.