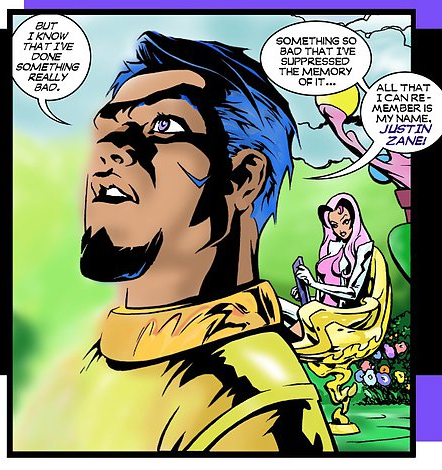 Growing up in the 1980s as comic book fans in Kansas City, we have known about Steve Lightle for many years. Steve is a native Kansas Citian who had made it to the big leagues with DC Comics. We were reading his comics for years before we ever got the chance to meet him in person. He was a big hero to us because Steve helped bring the Doom Patrol to KC, setting them up in Union Station.

For the record, we were VERY CONCERNED when the Doom Patrol was involved in a battle in Doom Patrol #4 that destroyed the Metcalf South Shopping Center. We got our comics at Clint’s South in that mall! How were we going to get our books with the mall destroyed?

(By the way, that same issue of Doom Patrol included a letter from our friend Jim Lynch, who asked the most important question about the Doom Patrol being in Kansas City, “Whose BBQ were they eating?”)

But that is the past, and we need to focus on the present. For Steve, that means the futuristic world of JUSTiN ZANE! As Steve shares on his Patreon site, “JUSTiN ZANE is the name of a hit tune in 2769 A.D., as well as the name adopted by an incredible mental patient on the satellite asylum known as “the TOMBS.” He lost his freedom because he is too dangerous to be free – or so they are telling him. The psychiatrist assigned to his case is the intelligent and beautiful Doctor Glimmer Starborn – but she seems too good to be true. Then there’s the matter of the glamorous newscaster Catrina Fellina, the anarchist skrok band known as The Idle Reich, and the destruction of Yasgur’s Planet.” Seriously, you have to be just insane to not want to read about JUSTiN ZANE!

Jerry and John travel down a long and winding road with Steve, talking about the origins of the web comic; how creating comics for online viewing varies from the traditional print editions; working on creator-owned characters vs. corporate-owned characters; and much more.

If you want to read JUSTiN ZANE, use your Google machine to visit stevelightle.wix.com/justin-zane. If you like what you see there, we encourage you to support Steve’s work via his Patreon page. Web-comics may appear for free to you as a reader, but someone still has to pay the bills to make them happen! If you want to meet Steve in person, come down to Clint’s Comics on May 7 for Free Comic Book Day! Artists, writers, free comics, and your favorite podcasters. How much better can it get?

Finally, we did have to record this interview without Cullen. He really wanted to be on the call, but family matters pulled him away, and that’s ok. We have said that family comes first for all of us, and we hope it’s the same for you, too.

As always, we are the Worst. Comic. Podcast. EVER!, and we hope you enjoy the show.