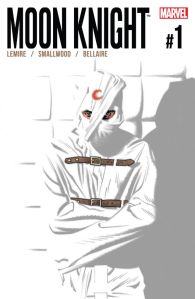 On this episode of the Worst. Comic. Podcast. EVER!, Jerry and John sit down with Greg Smallwood, artist of the new Moon Knight series (with writer Jeff Lemire) that debuts next week. Believe us when we tell you, PICK UP THIS BOOK! Seriously, if this sells out in two days and you don’t have a copy, it’s your own fault!

We’ve known Greg for many years, going back to a Planet Comicon where our table was next to Greg and Jai Nitz’s tables as they were promoting their Dream Thief book for Dark Horse Comics. Since that time, Greg’s stock has risen with each project and assignment, primarily for Marvel Comics.

We spoke to Greg about the challenges of his first stint on the Moon Knight book in 2014, and how that prepared him for the new launch. Have we mentioned lately how gorgeous the art is in the book? We ask about Greg’s influences with the character, and how page design plays a big part in his approach to the title.

Of course, we had to mention Greg’s Eisner Award win last summer, which may (OR MAY NOT) have been helped by this podcast. While we joke about our influence, we do know that it was well-deserved, and Cullen & John were happy to be at SDCC to see Jai accept Greg’s award.

Speaking of Cullen, there is a definite lack of his sultry tones on this show. As we recorded, Cullen was on his way to Seattle for Emerald City Comic Con. Expect to hear lots of incredible stories next week on his adventures there.

As always, we are the Worst. Comic. Podcast. EVER!, and we hope you enjoy the show.

Like Loading...
‹ Comic Cards Cavalcade Episode 028
I’ve Got Issues — That’s Why I’m Not Supposed to be Completely Honest with my Non-Parent Friends ›