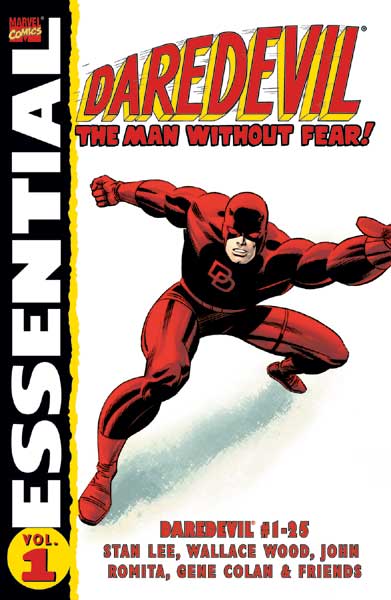 Overview: Following a freak accident that doused  him in radioactive waste, young Matt Murdock finds himself blind but with enhanced senses of hearing, smell, touch, and taste (not often showcased). Matt’s father, the boxer Jack Murdock, pushes his son to study hard so he doesn’t have to follow in his footsteps. When Jack refuses to take a dive in a fight, he is killed by the mob boss that had bet heavily against him. Matt vows to avenge his father, and trains his body to reach it’s peak perfection. Despite his blindness, Murdock dons a costume and takes to the rooftops of New York City as Daredevil, the man without fear!

We see that Murdock has become a successful lawyer, sharing a firm with his best friend from college, Foggy Nelson. Add in the adorable secretary Karen Page, who has a crush on Murdock, and our cast is set.

Daredevil battles a mix of villains from issue to issue. Some are one-and-done hooded thugs, and some are costumed criminals. We see Daredevil go up against some of Spider-Man’s foes in Electro and the Ox. He even gets his own set of rogues, with introductions of the Owl, Stilt-Man, and the Gladiator.

What makes this Essential?: Daredevil is a very unique comic character created by Stan Lee and friends. A blind super-hero goes against everything we imagine a hero should be. Sure, having the enhanced senses helps make it easier for Daredevil to do what he does, but he still remains a blind man swinging between buildings in New York City.

The problem I have with endorsing this as an Essential edition is that there are a dozen different story arcs and runs of Daredevil that are much, much better than the stories in this volume. This is a case where the Silver Age stories do not hold up against the Bronze Age and modern stories. Read this only if you are a Daredevil fan.

Footnotes: Daredevil’s original costume was a red-and-yellow garish combination that could only have been designed by a blind man (pun intended!). Beginning in issue #7, Daredevil converted over to his traditional all-red costume. In the issue, Daredevil’s thoughts on the new costume read, “I’ve secretly worked for months to redesign my fighting costume – – to make it more comfortable – – more distinctive!” Yes, very distinctive, and we’ll take Matt’s word on the costume’s comfort.

To find the original issues, or reprints, of Daredevil, check with your local comic book store. In the Midwest, I strongly recommend Clint’s Comics in midtown Kansas City. Clint’s has been in business for nearly 50 years at the intersection of Main St. and Westport Rd. The back-issue selection is incredible, and what you see in the store is just a small fraction of their total inventory. In addition to the back issues, Clint’s stocks current issues, trade paperbacks, toys, T-shirts, and more. Check out Clint’s Comics to build your own essential collection!