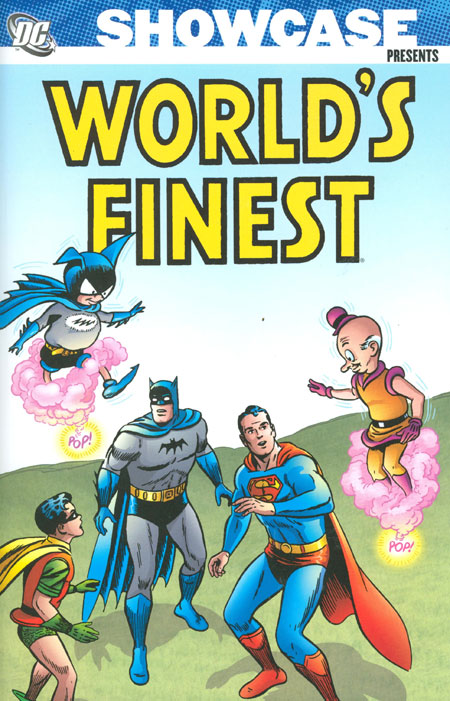 Overview: Sometimes the smartest creations in life is simply combining two great things together. For example, milk chocolate is awesome all on its own. So is peanut butter. Those two by themselves are some of the tastiest sweets in the world. But in 1928, Harry Reese had the brilliant idea to combine the two together. Now, some 80 years later, the Reese’s Peanut Butter Cup is the most popular candy bar in United States. <Excuse me for a moment, I think I need to run to the store to pick up a Reese’s!>

So peanut butter and chocolate, two great tastes that go great together. We all get that. But you are here to read about comics, right? So let’s take two great heroes (Batman and Superman), merge them together into one title, and we get the Showcase Presents World’s Finest Vol. 2.

The stories here follow the same pattern as the previous volume. Something happens that brings the two heroes together. Between Superman’s strength and Batman’s smarts, the heroes find themselves on the winning end of things at the end of each 15-page story. There is no continuity with these stories, so you can read them in any order. The supporting casts for both characters make numerous appearances along the way, as well as their rogues galleries.

It’s funny that I used the word ‘merge’ in the first paragraph. (Truthfully, not funny, but rather deliberate on my part!) The highlight of this volume involves the introduction in World’s Finest #142 of the Composite Superman, who might be just the greatest DC Silver Age character of all time. Joe Meach was a down-in-his-luck diver (don’t most divers head down eventually?), and Superman helps him out by getting him a custodian job at the Superman Museum. One night while Meach was cleaning up in front of a Legion of Super-Heroes exhibit, lightning hits the Legion figurines, and the electrical energy passes on to Meach. Suddenly, Meach finds that he has all of the powers of the Legionaires. Using Chameleon Boy’s shape-changing ability, Meach creates a hybrid costume that is half Superman, half Batman. Dubbing himself the Composite Superman, he appears to befriend Superman and Batman, but his long term goal is to destroy Superman’s life. Fortunately, our heroes see though his scheme, and stop Meach until he exhausts his powers. The Composite Superman, be it Meach or other characters, will return time and time again to face off against Superman and Batman.

Why should these stories be Showcased?: I can think of two good reasons why these stories should be showcased. The first is Batman, and the second is Superman. Seriously, this is a no-brainer. Of course these should be collected. Sure, they are Silver Age stories, but I would contend that the best Batman or Superman Silver Age stories from this time period are in this collection, and not in the Showcase Presents Batman or Showcase Presents Superman volumes. This is a perfect volume to skip around and read the stories that most interest you. I was always fond of the Joker-Lex Luthor team-ups. (DC tried to duplicate that team-up magic with a Clayface-Brainiac collaboration. Yeah, not quite as interesting as Joker-Luthor!)

To find the original issues, or reprints, of World’s Finest Comics, check with your local comic book store. In the Midwest, I strongly recommend Clint’s Comics in midtown Kansas City. Clint’s has been in business for nearly 50 years at the intersection of Main St. and Westport Rd. The back-issue selection is incredible, and what you see in the store is just a small fraction of their total inventory. In addition to the back issues, Clint’s stocks current issues, trade paperbacks, toys, T-shirts, and more. Check out Clint’s Comics to build your own essential collection!