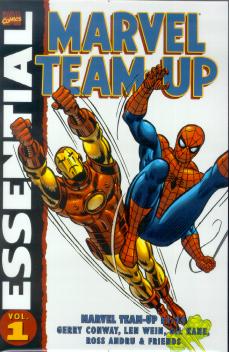 Overview: The comic industry has proven time and time again that imitation is the sincerest form of flattery. If a character sells well for one company, an imitation of that same character should sell just as well for a second company, or a third. In the early 1970s, DC Comics had made The Brave and the Bold a Batman team-up book. By all accounts, it was doing well, or at least well enough for Marvel to take notice and create their own team-up book featuring their marquee character, Spider-Man.

Marvel Team-Up ran from 1972-1985, with 150 issues plus seven annuals. Spider-Man was the lead co-feature in all but nine issues, which were shared between the Human Torch and the Hulk. So this is generally considered a Spider-Man book. The title ran bi-monthly for the first year before adjusting to become a monthly book.

Outside of the initial story arc with Spider-Man and the Human Torch, these are one-and-done stories featuring Spider-Man teaming up with a variety of characters. Some of these are characters who have recently debuted in other books, such as the Cat, Werewolf, or Ghost Rider. Other times it was to just keep the characters active, such as the X-Men team-up in issue #4. (Hard to believe now, but there was a period in the early 1970s where Marvel was not publishing any new X-Men stories on a regular basis.)

What makes this Essential?: I really like the team-up books. Throughout the 1970s and 1980s, Marvel had two titles (Marvel Team-Up and Marvel Two-In-One), and DC had two titles (The Brave & the Bold and DC Comics Presents) that allowed for a wide variety of characters to meet up. This Essential volume features some incredible creative talents, with art by Gil Kane and Ross Andru. The stories are written by Gerry Conway and Len Wein, two of Marvel’s key writers of the 1970s. This is a gateway book — a good way to introduce a reader to the Marvel Universe. In the grand scheme of things, this is probably not truly an essential book to own, but it is a great book to bring someone into the world of comics.

To find the original issues, or reprints, of Marvel Team-Up, check with your local comic book store. In the Midwest, I strongly recommend Clint’s Comics in midtown Kansas City. Clint’s has been in business for nearly 50 years at the intersection of Main St. and Westport Rd. The back-issue selection is incredible, and what you see in the store is just a small fraction of their total inventory. In addition to the back issues, Clint’s stocks current issues, trade paperbacks, toys, T-shirts, and more. Check out Clint’s Comics to build your own essential collection!