What a great weekend it was in Manhattan with the first Little Apple Comic Con. Our good friends of the show, Ali and Josh Smith, put on one incredible nerdy party on Saturday. The only thing that could have made it better was if the party continued on to Sunday. (But that would take away time for me to get this feature prepared!) I had a great time hanging out with Elite Supergirl at my table, hosting panels discussing Kickstarter projects and artists of the Midwest (look for podcasts of those panels coming soon), and spreading the good word of the Hero Initiative! If you were at the show, drop us a line and tell us your favorite moments from the show. Oh, and before I go, just a brief reminder that I’ve Got Issues still! 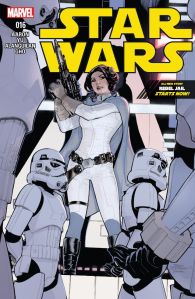 I love the start of a new story arc. New artists, new scenarios, and new intrigue dominate the latest issue of Star Wars. I got to tell you, I was just blown away by the art on this issue. Leinil Yu, Gerry Alanguilan, and Sunny Cho combine their efforts to give this book a cinematic masterpiece with our various cast members. We see the once and future wives of Han Solo (Sana Solo and Princess Leia, respectively) escorting Dr. Aphra (recently captured by the Rebels in the conclusion of Vader Down) to a maximum security prison hidden in a sun. But don’t assume that the prison is unbreakable, as we find out by the end of the issue. Meanwhile, we see Luke and Han off on a secret mission for the Rebellion. Unfortunately, a game of Sabacc backfires for Han, and the duo realize that the only thing of value that they have to bargain with is the bounties on their heads. Jason Aaron continues to nail it with each story, even if he did leave Chewie out of this issue! 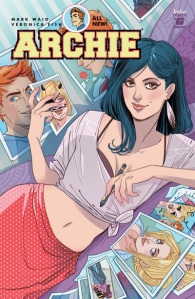 For me right now, buying Archie is a no-brainer. Between Mark Waid’s stellar new take on America’s most famous teenager, and the spectacular art each month, you should be buying this book. HOWEVER, the hardest decision to make is which of the incredible covers to go with each month. I opted with the C cover by Marguerite Sauvage pictured here, but the other covers from Veronica Fish and Derek Charm. Again, you need to be buying this book. I said this following issue #1, and I said it again after issue #2. This issues finds Archie laid up in a hospital bed suffering from a concussion, following a beaning by a massive home run hit by Betty. Meanwhile, we see that maybe Veronica does have some true feelings for Archie. Reggie continues to be frustrated by Veronica brushing off his advances. So frustrated that he decides to connive with the one person in all of Riverdale who utterly hates Archie – Veronica’s father! We’ve known a potential showdown was coming since issue #1, and it looks like we will see that play out in the next issue. 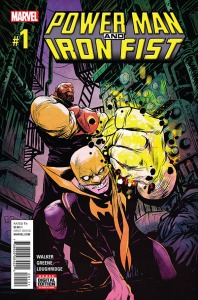 The boys are back! Given the success of the Marvel Knights shows at Netflix, with shows planned for both Luke Cage and Iron Fist, it had to be a foregone conclusion that Marvel would help us out by reuniting these two characters as a team. Well, at least Danny thinks they are back to being a team. According to Luke, hanging out with one of his best friends does not mean that the team is back together. At least not yet. The boys reunite as their former office manager Jennie Royce is released from prison. Jennie asks for some help from Luke and Danny in retrieving a necklace from Tombstone. The morgue-white mobster politely disagrees, and some fisticuffs ensue! But it turns out that maybe Tombstone was telling the truth. Come back next issues to see what happens next! And for those long time fans who remember this team of heroes from the 1970s and 1980s, we do get one “Sweet Christmas” reference, and the introduction of both “Fiddle-Faddle” and “Knick-Knack-Paddy-Whack” into the Luke Cage fighting vocabulary. All new fathers should instantly relate to the Fiddle-Faddle!