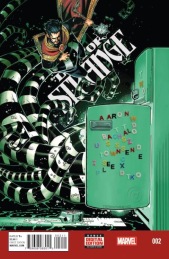 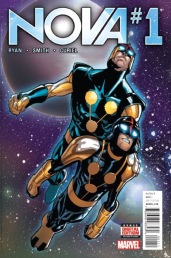 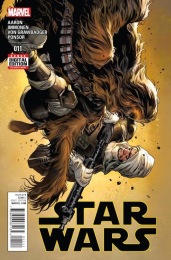 What a week for me! My move to Oregon is finally complete with the arrival of my 12-year-old daughter and 10-year-old son. I was treated to my first grandbaby on Halloween, I got Oregon license plates, the Kansas City Royals won the World Series, and the Portland Timbers defeated the defending MLS champions Sporting Kansas City in a historic game with eleven rounds of penalty shots. New Comic Book Day is going to have a hard time matching those milestones, but comics are my jam and this week I’m going to be jamming hard. Take a leap of faith with me on three of these picks and see if they don’t get added to your pull list!

Doctor Strange #2 ($3.99, Marvel Comics): With only the second issue of this series hitting the stands this week, it’s obviously too early to tell what direction the book will take. I will tell you Jason Aaron is an established mega-talented writer (Scalped, Southern Bastards, Men of Wrath) and Chris Bachalo (Uncanny X-Men V3, Death: The High Cost Of Living, Generation X) is a phenomenal artist with the type of style perfect for tales of magic and suspense. I was thrilled with the dialogue, pacing, and art of the first issue and had zero buyer’s remorse. Pick this book up! It should be the Marvel version of The Sandman. The Sancto Sanctorum is the scene of the action this issue as we find out there may be things lurking in the dark corners of Strange’s abode preparing to destroy Earth!

Paper Girls #2 ($2.99, Image Comics): There have been numerous female protagonist/ensemble books out in 2015 (Unbeatable Squirrel Girl, Lumberjanes, A-Force, Captain Marvel, Sunstone, Ms. Marvel, Harley Quinn, Barb Wire), and Paper Girls is joining the roster with another all-star creative team line up. Brian K. Vaughan, Cliff Chiang, Matt Wilson, and Jared K. Fletcher have come up with a story of friendship and sci-fi suspense set in the 1980s. The art from the first issue was bold and simplistic with Chiang and Wilson providing a very visually compelling start to Vaughan’s tight dialogue between the actors.This is listed as an ongoing series on the Image Comics website which is surprising to me given they usually like self contained story arcs in five or six issues so they can release a collection in trade paper back format. I’m not sure how this series will flow as an ongoing title, but I’m happy to invest some more money into the second issue to see where the story will go.

Nova #1 ($3.99, Marvel Comics): Gerry Duggan’s run on Nova just prior to the Secret Wars event was really fun! My son, Lochlan, and I had been reading the series together but he began to lose interest during the Original Sins story line. I knew there were only a few more issues in the series so I went and picked up the rest of the run, with no intention of picking up the next volume as a part of the All-New, All-Different Marvel launch. Remember I mentioned in the opening paragraph about Lochlan moving up to Oregon this week? On the plane ride from Kansas City to Portland he said he wanted to pick the book up again. So we’re cramming trying to read the last issues of the Duggan issues in anticipation of the new #1 being released this NCBD. The new writer, Sean Ryan, has a lengthy list of previous work to his credit in the comic industry including being a writer on a diverse list of titles like Jonah Hex, Excalibur, and Red Robin. We also get Cory Smith (Magnus, Turok, Teenage Mutant Ninja Turtles) doing the interior art and Humberto Ramos delivering the cover art for the series. I’ll definitely pick up the complete first story arc and then I’ll check back in with you!

Star Wars #11 ($3.99, Marvel Comics): We’re approaching the end of 2015, and with November already here it means our book of the year commitment is almost over. When we picked Star Wars it was a no-brainer for John, Jerry, and I. We’re all Star Wars geeks, the series was starting over and one of our favorite creators and people in the world, Jason Aaron, was doing the writing. It’s been a fun read all year long and hasn’t relied on crossovers or green space bunnies to keep the story and action moving forward. I mentioned last week on the podcast how hard it was going to be for me to stop picking up this book after the end of the year. It’s truly brings me great pleasure to read it and talk about it with the guys. The art is fantastic as Stuart Immonen is drawing at a high level for this story arc and seems to be in perfect unison with Jason Aaron. I take heat sometimes for writing truncated reviews and opinion pieces. But sometimes words get in the way. This issue; Chewbacca and Dengar. Full stop.