I will admit up front I’ve been a Marvel guy most of my life. I have had stretches where I’ve read a DC book or two, but for the most part, I simply haven’t been in the same head space as the Distinguished Competition. The exceptions have been notable, though. I collected Watchmen, The Dark Knight Returns, Green Arrow: The Longbow Hunters, and Crisis On Infinite Earths off the rack of Clint’s South in the Metcalf South shopping center in Overland Park, KS, when they were first published.

Before those books, I was a die hard Batman and the Outsiders fanatic. I also causally picked up Teen Titans because of my friend and Co-Founder/Co-Host John; Green Lantern Corps because of Kilowog; the death of Superman in the black mylar bag was purchased; and I spent a lot of money on the Millennium event to finally learn the definition of buyer’s remorse. This is not to say DC wasn’t turning out great books during this phase. The list of books published in the ’90s and early ’00s are a testament to quality publishing. Sandman, Shade the Changing Man, Animal Man, Swamp Thing, Preacher, Transmetropolitan, and The Invisibles were all under the Vertigo imprint and are widely regarded as the very best in mainstream comics from the period.

So why didn’t I gravitate over and start reading these great books? I don’t know. There were probably a ton of reasons. I was in my 20s and as stupid as the day is long. (I’m not sure if I’ve made a lot of progress there!) No one I knew was passionately describing to me every panel of these books, so I had no one to share the enthusiasm with, perhaps. (Friend of the show Tim Benson, and everyone else at the WCPE, honestly talk about a book out now and marvel at how much fun it is to read. We talk about it on the podcast, Twitter, and Facebook. Loving what you do and having friends who love it as much and want to talk about it all of the time is the best part of belonging to any group, in my opinion.)

Anyway, I felt like I hadn’t really given DC the chance it deserved through the years, and I have been pretty harsh on the podcast about how hard it is to love something when it’s been muddled up so badly like I feel the New 52, Convergence, and DCYOU have been. I don’t understand what they are doing over there in the giant WB tower, but I do understand the talent levels are essentially the same between the big three. So I decided to challenge myself, and my biases, and picked a few DC books to read with a commitment to stay with them for a year. I’ve decided to pick up a few of the more traditional books in Cyborg, We Are Robin, and Green Lantern: Lost Army. and a few of the more genre-challenging offerings with Doctor Fate, Black Canary, Prez, and Constantine.  You can find my recommendation for Cyborg as a part of my FCIW column which comes out Tuesday. In the spirit of giving each of these selections the chance to fly or fall on their own I won’t be looking for continuity, crossovers, or origin stories to be deal breakers. I am looking for great story telling and compelling art to be the deciding factors. I’m anxious to get started, so throw me some feedback to let me know what you think about these books.

Until DC and Kentucky Fried Chicken make a con exclusive comic featuring the Colonel, you can continue to count on my loyalty for the next eight months. Let’s see what you’ve got! 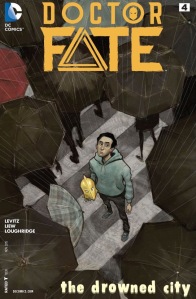 Paul Levitz is the writer of this book, but Paul Levitz doesn’t just write comics. He’s also been an Editor and the President of DC Comics from 2002 – 2009, and he’s currently the Contributing Editor and Overall Consultant for DC Entertainment. He has a lengthy list of writing credits to his name, with his most notable runs being with The Legion Of Super-Heroes from 1977 – 1979 and 1981 – 1989. Mr. Levitz was also the person responsible for hiring Karen Berger as Executive Editor for the Vertigo Imprint from DC. Sonny Liew has been producing comics professionally for over a decade, and has received critical acclaim for his work on the Vertigo book, My Faith In Frankie. Together with colorist Lee Loughridge, they have made this book feel more like a Vertigo book than a DC book and I love it. It has a compelling story arc with magic, angst, and wonderful art. It possesses all of the new energies possible from a fresh take on the main character, and rings true when it comes to moments of internal reflection, heroic deeds, and homework. The first four issues have been a wonderful ride. AND THAT HELMET!!! 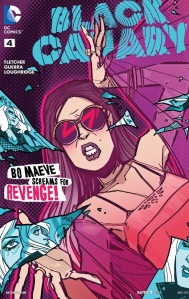 I didn’t get the Black Canary for a long time. On the surface, she seemed to be bringing nothing more than the fishnet hose, blonde wig, and a sonic scream to the Hall of Justice table. I read the aforementioned Longbow Hunters, and those generalizations went away. At the very same time Frank Miller was transforming Batman into the grim and gritty version of Dark Knight we have today, Mike Grell was taking Black Canary down a dark path which changed her very nature in comics to this day.  So when I saw the DC Sneak Peek: Black Canary give away earlier this year, I will admit I was super intrigued but I was curious as to how books like Birds of Prey and Justice League of America handled her with modern sensibilities. After reading a couple of great reviews and their must-read lists here and here, it’s obvious the character has been allowed to evolve and be a fully realized entity in the DCU. With this knowledge, I put the book on my pull list and have not been disappointed. Black Canary is anything but an ordinary book. Pia Guerra, the primary artist on Y: The Last Man is doing the art for the book and it’s an amazing ride every month. Great color palettes and awesome pacing are your gifts from her every month. Brenden Fletcher, (Batgirl and Gotham Academy), lends his considerable talent to the writing chores and delivers a compelling adventure for Dinah, which seems to be inclusive of her various pasts while providing opportunity for continued growth as a character. This is a special book and I can’t wait for the next issue to come out. 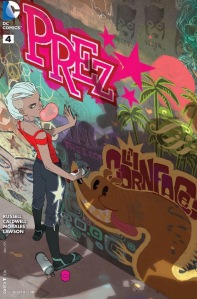 If you have a political bone in your body, you need to be reading Prez. It’s so smartly written and captures the ridiculousness of our modern society so good, it’s scary! Back in 1973, DC released the first volume of this book with a male lead and it covered topics as varied as gun control and vampires in the White House. Unfortunately, Prez faced publication impeachment, with issue #4 being the last issue officially published. (The fifth issue was released as a part of the Cancelled Comic Cavalcade #2.) The character of Prez Rickard has appeared in several different books throughout the years most notably in Frank Miller’s Batman: The Dark Knight Stirkes Again, in issue #54 of The Sandman, and The Multiverse where he is the immortal President of Earth-47.

In the 2015 take on the book, Mark Russell returns to more of the satirical position the book was famous for. The new Prez stars Beth Ross who becomes President as a result of Twitter voting in the year 2036. Dominike Stanton is a newcomer to the big three scene, with most of his work being done for Boom Studios’ The Big Con Job, but his pencils are sharp and perfectly suited for this type of story. I’m glad I’ve taken a chance on this book as I believe it reinforces what John always says, “Comics are a medium, not a type of story”. 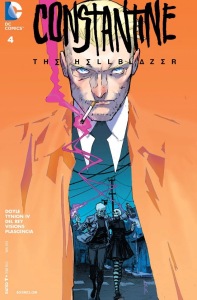 This is one of the books I’ve been most anxious to read. Prior to picking up this series I had never read a Hellblazer comic, seen the movie, or watched a single episode of the T.V. series. So I have only the story itself to get me interested in the protagonist and his struggles. I needn’t have been anxious. The character has been around sine 1988 and has been a hopping on point for many British writers in the DCU including Jamie Delano, Grant Morrison, Neil Gaiman, Garth Ennis, John Smith, Eddie Campbell, Paul Jenkins, and Warren Ellis. Constantine is an occult detective with questionable methods and shaky morals who often creates as much drama as he settles. Doyle and Tynion have written a story within the first four issues which is absolutely heart breaking as John is forced to learn all of his friends are dead, and his old girlfriend Veronica is stuck between life and death. The art team has changed a little since the first two issues but the tone of the visuals remains the same and allows you to focus on the tight dialogue. I’m really enjoying this book and look forward to learning more about the hellblazer in the coming months. 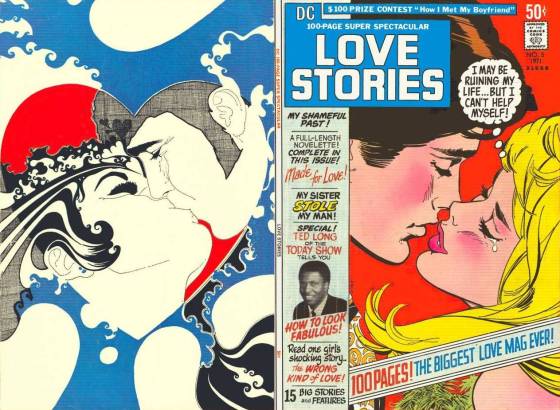