New comic book day (Wednesday for normal people) is rolling around once again. This is the last NCBD before the new school year and before the inaugural year of Kansas City Comic Con so I need to squeeze the most out of it that I can. Here we go with four great options for your new comic book needs.

Darth Vader #8 ($3.99, Marvel Comics): The force has been strong with the Star Wars titles published by Marvel Comics and, for me, Darth Vader has been my favorite of the bunch. Star Wars, Princess Leia and now Lando have all had strong issues and characters but this title has given me the Darth Vader that I want. Merciless, cunning and unapologetic about it, Vader talks all comers and is surrounding himself with a fascinating cast of supporting characters. Chief among these is the archaeologist Doctor Aphra whose talents are helpful to the dark lord in his efforts to track down the pilot that destroyed the Death Star.  Also assisting him are BeeTee and Triple-Zero. These two droids look a lot like R2-D2 and C-3PO, except for the part where they kill people. When Vader and the two droids decide to clear a path through some rebel scum … let me just say that you are going to want to stand back. The book is created by the team of writer Kieron Gillen, artist Salvador Larroca, and colorist Edgar Delgado and they are absolutely bringing the chills. Buy this book!

John Flood #1 (of 6) ($3.99, BOOM! Studios): Who doesn’t want to get more done each 24 hours? I know that I certainly do but that pesky need for sleep gets in the way. Due to a government experiement, John Flood no longer has the need for sleep but the result isn’t all its made out to be. Flood is a lot like you might be when you are sleep deprived, at once exhausted and hyperactive. Every thing that he experiences is almost like a dream to the point where separating the real and the imagined is difficult. Despite this, Flood is able to make connections that everyone else misses, possibly an effect of having his subconscious so close to the surface. Working as a PI with an ex-cop, Flood has found a pattern that puts him on the trail of a murderer but the murderer is on his trail as well. Who will win the hunt? Check out this 6 issue series by writer Justin Jordan, illustrator Jorge Coelho and colorist Tamra Bonvillain. 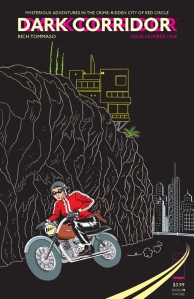 Dark Corridor #1 ($3.99, Image): Fans of crime noir stories should love the first story arc of the new ongoing series Dark Corridor. The series will feature a story that will run for several issues followed by a completely different story in a completely different genre. This first story is about a group of female assassins that quietly take out the all-male leadership of the mobsters that control the city of Red Circle. Reading this book should feel a bit like watching an old gangster film, with one major twist. Instead of the female characters simply being set pieces for the males to push around, here they are doing the pushing and the fellas better watch out! The story and art are both by Rich Tommaso who also did the art for Satchel Paige: Striking Out Jim Crow which Cullen reviewed here for a 60-Second Review.  The art and writing for this one point to a fantastic book so go check it out! 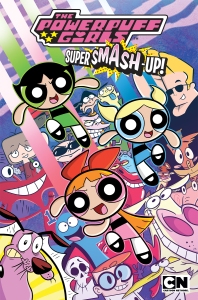 Powerpuff Girls: Super Smash Up, Volume 1 ($19.99, IDW Publishing): I love me some Powerpuff Girls. Buttercup, Blossum and Bubbles are always ready to mete out justice from the little fingerless hands and I’m ready to soak up every bit, especially if Mojo Jojo is involved. In this volume, the girls are just trying to relax after their cross-over adventures in the Super Secret Crisis War! The super-heroines are getting a tour of Dexter’s Laboratory (love Dexter!) but unfortunately Dee Dee accidentally puts the entire multiverse in danger.  The girls will need to travel to multiple worlds from Cartoon Network including Cow and Chicken, Courage the Cowardly Dog, and Johnny Bravo! This volume collects the five volume series all in one so that you don’t have to chase down the individual issues. Enjoy! The IDW page lists 11 creators involved in this one so I won’t list them all but I’m sure it will flow together well.

As a bonus, below are the top ten books in terms of pulls for August 5th per Comixology (as of August 4th). This does not necessarily represent the best selling books across all sites and formats, just the information that they have via their website.

As always, WCPE is happy to be publishing #FCIW with the support of Elite Comics in Overland Park, KS. William and the Elite Crew run a friendly, clean, and safe comic shop which is welcoming to all and supportive of many local and national non-profits including The Hero Initiative. Stop in, pick up these four books, and let the gang at Elite Comics know that the Worst. Comic. Podcast. EVER! sent you over.