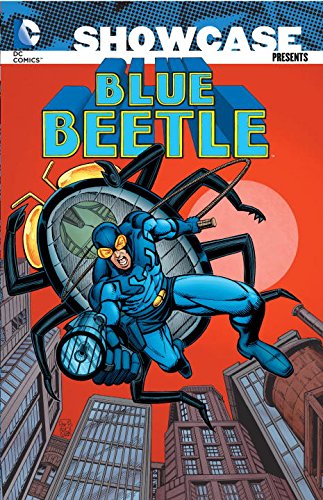 Overview: Stop me if you read this story before. Wealthy playboy oversees a large scientific company, but has a hidden life, where he dresses up in a costume, flies around in a vehicle that matches his motif and stops super-villains and other forms of crime. You’re thinking of Blue Beetle, right? Yes, one of the stars of the Charlton Comics’ Action Hero line jumps into the pages of DC Comics. Following his successful appearance in Crisis on Infinite Earths, the Blue Beetle becomes the first Charlton hero to get his own monthly title.

So let’s meet Ted Kord. He’s rebuilt KORD (Kord Omniversal Research & Development), Inc. after his father left it in ruins. He’s rich, good-looking, and mostly single — he’s been dating his girl Friday, Melody Case. Ted also has a secret identity – the Blue Beetle. With a hidden base located under the company headquarters in Chicago, Blue Beetle battles a mix of foes from the Charlton days (Madmen) as well as long-time DC foes (Doctor Alchemy, Chronos), and crosses paths with many DC heroes, such as the Teen Titans, the Justice League, and the Question.

We also learn that Ted Kord is not the first person to wear the mantle of the Blue Beetle. The original Blue Beetle was Dan Garrett, a university professor and archaeologist. Well before Professor Henry Jones, Garrett was exploring the Egyptian dig of Kha-Ef-Re where he discovers a mystical blue scarab. The token grants Garrett super-strength, turning him into the first Blue Beetle. Dan Garrett had many adventures, before finally meeting his fate on mysterious Pago Island. While on his death bed, he got Kord, a former student of his, to promise to carry on his secret calling. Unable to use the blue scarab, Kord develops gadgets, weapons, and a flying ship (“the Bug”) to allow him to carry on the mantle of the Blue Beetle.

As the story develops, Ted Kord finds himself spending more and more time as the Blue Beetle, and less time managing the work of KORD, Inc. This leads to Case reaching out to Ted’s missing father, Thomas Kord, to return and take over the reigns of the company, just as it all comes crashing down (literally and figuratively). The series ends with Ted Kord walking off into the sunset, content with becoming Blue Beetle full-time and leaving the corporate life behind.

Why should these stories be Showcased?: Much like the situation I found myself in when reading Showcase Presents Booster Gold, I was prepared to overlook this collection, having loosely followed the Blue Beetle run 28 years ago. With the re-read of this title, I’m a little more impressed with the stories. Len Wein did a noble job in integrating Blue Beetle and his cast into the DC Universe, with nods to his Charlton roots. But as with Booster Gold, it’s not the solo book that fans came to know these title characters – it’s the Justice League of the late 1980s that gave us the defining view of Blue Beetle, which right or wrong, is that of comedy relief. I find myself reconsidering my position on this. I really want Blue Beetle to be a more serious hero, along the lines (but not as dark) as Batman. But as I read this title, I found myself wishing that DC would publish a Showcase Presents Justice League Vol. 1 sometime soon.

Meet the Action Heroes: From 1946 to 1986, Charlton Comics published comics in a variety of genres, from war to romance to licensed books to super-heroes. In fact, in the mid-1960s, then Charlton editor Dick Giordano developed a line of characters dubbed the “Action Hero”, which included Blue Beetle, Captain Atom, the Question, the Peacemaker, the Judomaster, and Peter Cannon, Thunderbolt. These characters had varying degrees of success, but most of the titles were canceled by the end of that decade. Jump ahead to 1983, and Charlton was struggling to survive. Then DC Managing Editor Dick Giordano worked out a deal to buy the rights for the Action Heroes from Charlton. DC incorporated these characters into the Crisis on Infinite Earths mega-event, and then put Blue Beetle, Captain Atom, and the Question into their own monthly books. In addition, Alan Moore used archetypes of these characters when he created Watchmen with Dave Gibbons.