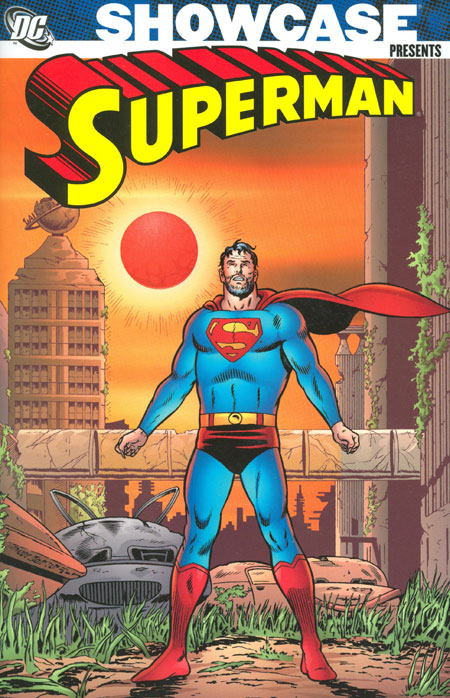 Overview: Look, up in the sky! It’s a bird! It’s a plane! It’s Superman! Welcome back to the fourth Showcase Presents volume of Superman tales from Superman and Action Comics. The story formulas remain basically the same from previous volumes, but the quality of the stories continues to improve with each collection.

What stands out in this volume is the innocent story points that are introduced in these issues, but then have ripple effects over the next 50 years of Superman story-telling. For example, in Superman #158, our hero and Jimmy Olsen travel to the bottled city of Kandor. The two adopt new costumed identities inside the city, Nightwing and Flamebird. They would adopt those identities, before handing the roles off to two of Superman’s cousins in the pages of Superman Family in the 1970s. (And in the 1980s, as Dick Grayson was growing out of the Robin identity, he would adopt the new costumed identity of Nightwing as a tribute to the role that Superman had in his life growing up. Grayson would use Nightwing as his code name for nearly 30 years.) Likewise, the adventures of Superman Red and Superman Blue, from Superman #162, was revised in the 1990s by Karl Kessel and friends when Superman was split into two separate electrical beings.

Why should these stories be Showcased?: One of my biggest gripes about the Silver Age Superman stories is that there is no order or continuity to the stories. Most of these stories can be read in any order. Sure, you may have characters introduced from time to time, such as Supergirl, but it’s not a distraction if a story does not include the ENTIRE supporting cast. But we finally get a moment in this volume, Superman #161, where things change forever. We experience the death of Ma and Pa Kent, as Clark Kent is once again orphaned. (Yes, although not reprinted here, but the Kents remained quite alive and active in the pages of Superboy, which recounted his teenage adventures.) The death of his adoptive parents forced the creative teams to start changing the stories. Suddenly, Clark no longer had the excuse of going back to Smallville to see his parents. The orphan angle gets played up on two different levels. Removing these two characters (which lasted until the John Byrne reboot of the Superman franchise following Crisis on Multiple Earths) changed the dynamics for the creators, forcing them to tell NEW stories rather than just rehashing previous stories.

To find the original issues, or reprints, of Superman and Action Comics, check with your local comic book store. In the Midwest, I strongly recommend Clint’s Comics in midtown Kansas City. Clint’s has been in business for nearly 50 years at the intersection of Main St. and Westport Rd. The back-issue selection is incredible, and what you see in the store is just a small fraction of their total inventory. In addition to the back issues, Clint’s stocks current issues, trade paperbacks, toys, T-shirts, and more. Check out Clint’s Comics to build your own essential collection!