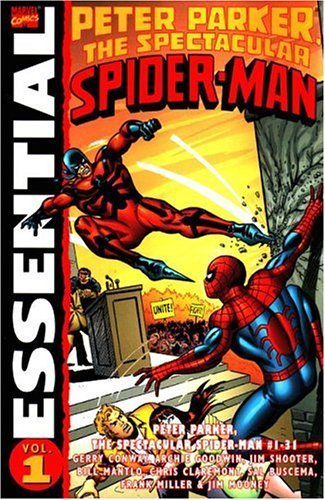 Overview: Following the long-established comic trend of duplicating success, Marvel introduced another Spider-Man title to the newsstands in 1976. Currently featured each month in Amazing Spider-Man, Marvel Tales, Marvel Team-Up, and Spidey Super Stories, a new title was added to the list with Peter Parker, the Spectacular Spider-Man (PPTSS).

In a column in issue #1, writer Gerry Conway explained that this new title was added to help give more room to feature the supporting cast of characters in Spider-Man’s life. We got longer stories involving Glory Grant, Mary Jane Watson, the White Tiger, and others. This title gave us more access to Peter Parker’s life beyond the red-and-blue costume.

Familiar foes like the Tarantula, the Vulture, Morbius, and Kraven make appearances in this run. But the new foes introduced are a mix of intriguing challenges (such as Lightmaster and Carrion) to downright pop-culture bad guys anchored in the 1970s (such as Razorback and Hypno-Hustler). In addition, a long story arc involving White Tiger and the Sons of the Tiger tie in with the popularity of martial arts at that time.

What makes this Essential?: This is a borderline essential book. Spider-Man was the most popular character at Marvel in the mid-1970s and would be soon making the jump to television with the live action series, so introducing another title featuring Peter Parker made sense. However, within the first year, there were two fill-in issues, so I wonder how much effort was ongoing to make sure the book shipped on time. Compared to the stories in Amazing Spider-Man and Marvel Team-Up at this same time, I feel like these stories are a step below in quality. For the Spider-Man fan, this should be a must read. For the casual Marvel fan, you could skip over this and just concentrate on the Essential Spider-Man line of books.

Peter Parker, the Spectacular Spider-Man #6 is a reprint issue from Marvel Team-Up #3. A new introduction and final pages were included, and a few panels were re-worded. This did lead into the Morbius storyline beginning in issue #7.

Peter Parker, the Spectacular Spider-Man #11 appears to be a filler issue that was originally intended for Marvel Team-Up. The issue is written by Chris Claremont, the then current scribe on Marvel Team-Up, and this would be the only issue of PPTSS that Claremont would write. No reference is made in the story to the previous or following issues.

To find the original issues, or reprints, of Peter Parker, the Spectacular Spider-Man, check with your local comic book store. In the Midwest, I strongly recommend Clint’s Comics in midtown Kansas City. Clint’s has been in business for nearly 50 years at the intersection of Main St. and Westport Rd. The back-issue selection is incredible, and what you see in the store is just a small fraction of their total inventory. In addition to the back issues, Clint’s stocks current issues, trade paperbacks, toys, T-shirts, and more. Check out Clint’s Comics to build your own essential collection!