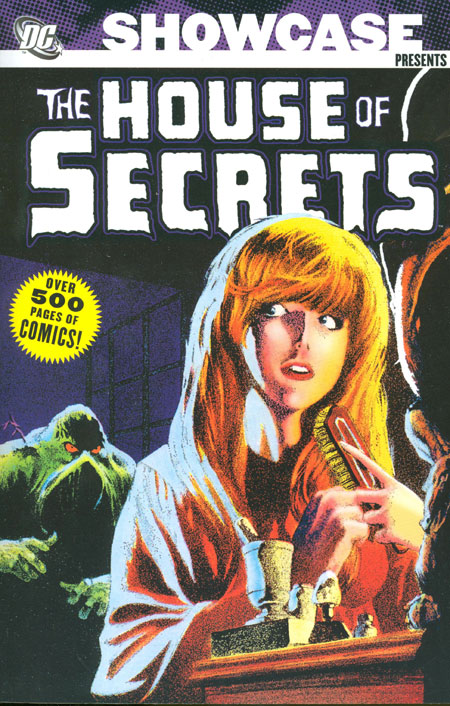 Story Continues In: Showcase Presents The House of Secrets Vol. 2

Overview: Do you dare enter the House of Secrets? It’s a strange house, filled with locked rooms, dusty corridors, a musty basement, and a mysterious attic. It also inspires a lot of stories of ghosts, demons, and witches.

Not to sound like I am repeating myself here, but the origins of this title are the same as The House of Mystery. In 1968, industry veteran Joe Orlando was brought in from EC Comics to take over the editor duties of numerous books at DC, including the horror line. The content took a darker tone, as Orlando introduced the EC-story style which was pushing the boundaries of the Comics Code Authority. The House of Secrets was revived as a title to serve alongside The House of Mystery.

The comic is hosted by Abel, the caretaker of the house, who introduces a lot of the stories and talks to his imaginary friend Goldie. (Abel’s brother Cain was the host for The House of Mystery.) The stories range from 4-12 pages, so each issue has 4-5 features each month. There is no continuity between the stories, so these can be read in any order.

The highlight of this book is issue #92 (July 1971), in which the Swamp Thing makes his first appearance in comics. This Swamp Thing is Alex Olsen; the more recognizable Alec Holland Swamp Thing would debut in 1972  in Swamp Thing #1.

Why should these stories be Showcased?: For these anthology titles, it’s hard to strongly recommend or strongly downplay this collection. Given the wide variety of stories, there is probably something in this volume that a reader will really enjoy and something in this volume that will bore a reader. It’s worth a look, given the incredible talents working on this book. I don’t know that this is a must-own volume, but I don’t think you will be disappointed if you do own it.

Cover Girl: The cover to The House of Secrets #92 is used for the cover of this Showcase Presents. The cover by Bernie Wrightson shows the Swamp Thing approaching a young woman. That young woman was modeled by Louise Jones, who would later become the popular Marvel writer and editor Louise Simonson.

To find the original issues, or reprints, of The House of Secrets, check with your local comic book store. In the Midwest, I strongly recommend Clint’s Comics in midtown Kansas City. Clint’s has been in business for nearly 50 years at the intersection of Main St. and Westport Rd. The back-issue selection is incredible, and what you see in the store is just a small fraction of their total inventory. In addition to the back issues, Clint’s stocks current issues, trade paperbacks, toys, T-shirts, and more. Check out Clint’s Comics to build your own essential collection!