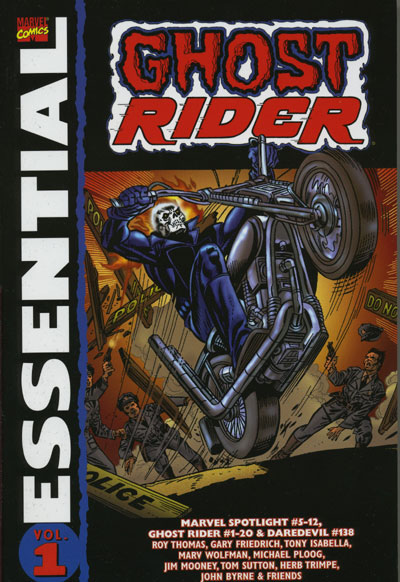 Overview:  Johnny Blaze is a motorcycle daredevil with a traveling road show. When the owner of the show, Crash Simpson, announces he is dying from cancer, Blaze seeks out and strikes a deal with Devil for his soul in an attempt to save Crash. The Devil accepts, but like any deal with Satan, the deal works against Blaze. Crash is saved from cancer but still dies in a stunt accident. As part of his deal, Johnny Blaze is transformed into a mystical servant of Hell, known as the Ghost Rider.

The early stories deal with Blaze trying to free his soul from the control of Satan. This leads to the introduction of the devil’s estranged offspring, Daimon Hellstrom, who would become an anti-hero in his own right as the Son of Satan.

Eventually, Blaze gets his soul released, but he still retains the Ghost Rider abilities. Early on, his transformations occurred at dusk, but now Blaze finds that he can now control the transition for anytime day or night. He can also extend his powers to create a flaming motorcycle out of the hellfire at his control.

In the later issues, Blaze starts working in Hollywood as a stuntman on a television show, where he meets the actress Karen Page. For longtime Marvel readers, you will recall Page as the one-time secretary of lawyer Matt Murdock. So it’s only natural that Ghost Rider would cross paths with Daredevil, the man without fear, which is exactly what happens as this volume concludes.

What makes this Essential?: I will be the first to admit that I have never been a Ghost Rider fan. I held off getting this book for as long as I possibly could, just out my general dislike for the character. What I found reading the early stories of Johnny Blaze is a far different Ghost Rider than the one that gained such popularity in the 1990s. This Ghost Rider seems more human, whose initial changes were brought on by the setting and rising of the sun. He’s a true anti-hero, never viewing himself as a super-hero; just much more interested in riding his bike at the next show. Based on his history in the Marvel Universe, the Ghost Rider is an important hero to read. But the Ghost Rider in these stories is much different than the Ghost Rider you picture in your head.

To find the original issues, or reprints, of Ghost Rider, check with your local comic book store. In the Midwest, I strongly recommend Clint’s Comics in midtown Kansas City. Clint’s has been in business for nearly 50 years at the intersection of Main St. and Westport Rd. The back-issue selection is incredible, and what you see in the store is just a small fraction of their total inventory. In addition to the back issues, Clint’s stocks current issues, trade paperbacks, toys, T-shirts, and more. Check out Clint’s Comics to build your own essential collection!