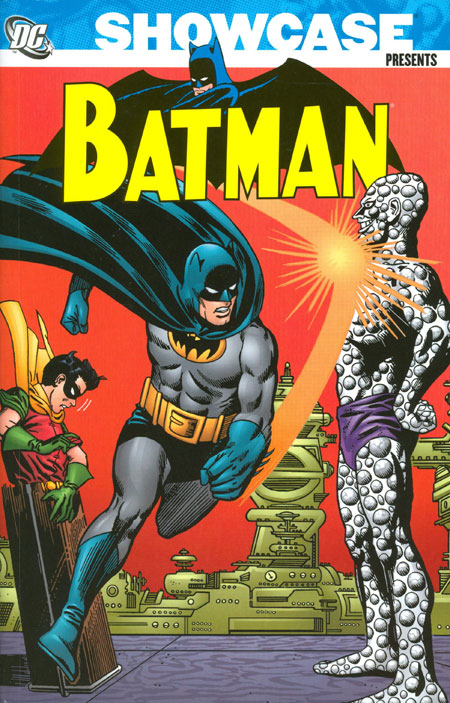 Overview: Welcome back to the Silver Age of Batman comics. Once again, these stories are generally one-and-done stories, although some plot lines may run over several issues from time to time.

Picking up where the first volume left off, we finally find out the identity of the mysterious Outsider that had been plaguing Batman and Robin for the past year. Once that case has been resolved, loyal butler Alfred Pennyworth is able to return to service at Wayne Manor, and dear old Aunt Harriet quickly fades into the background.

The highlights of the stories in this volume include the new villains that are introduced to Batman’s Rogues Gallery. The deadly Poison Ivy makes her debut, appearing in two issues. (Strangely, she then went into hibernation, as she didn’t become a prominent Batman foe until the late 1970s.) Similarly, Blockbuster made a handful of appearances but did not become prominent for several years.

The creators of the comics give a nod of the hat to the popularity of the Batman TV series with Batman #183. A hood posing as an injured Batman tries to get Robin to take him back to the Batcave. Robin recognizes the fake, as this Batman does not have the yellow chest symbol. So Robin takes him to a fake Batcave that the duo had set up. Robin suggests that the faux Batman rest up by watching the popular TV documentary that shares their exploits. The hood is eventually revealed when the real Batman shows up.

Why should these stories be Showcased?: When I was a kid, I would search for comics at whatever store my parents would be shopping at that day. I would go through the spinner rack trying to decide what comics I would want to take home with me, based on the cover image and what characters would be in the book. I would often go with the team books like Justice League of America or The Avengers just because it would offer me so many heroes for my 35 cents. Once I had identified which comics I wanted, I would then peruse other comics, to absorb as much of the material as I could before it was time to check out.

Using those same criteria, I would probably mark this as a book to buy and take home with me. This volume gives us plenty of Batman team-ups, with Robin, Elongated Man, Atom, and others. We get the classic Batman villains such as Joker and Riddler, plus the introductions of Poison Ivy and Blockbuster, both who would cause Batman trouble for years to come. Finally, this volume gives us the conclusion to the Outsider mystery which started in the stories found in Showcase Presents Batman Vol. 1. This may not be the greatest collection of Batman stories, but you get your money’s worth with the stories in this volume. Sadly, it will cost you more than 35 cents to buy this collection.

The Batman story from Detective Comics #343 is also reprinted in Showcase Presents The Elongated Man Vol. 1.

To find the original issues, or reprints, of the Batman or Detective Comics, check with your local comic book store. In the Midwest, I strongly recommend Clint’s Comics in midtown Kansas City. Clint’s has been in business for nearly 50 years at the intersection of Main St. and Westport Rd. The back-issue selection is incredible, and what you see in the store is just a small fraction of their total inventory. In addition to the back issues, Clint’s stocks current issues, trade paperbacks, toys, T-shirts, and more. Check out Clint’s Comics to build your own essential collection!