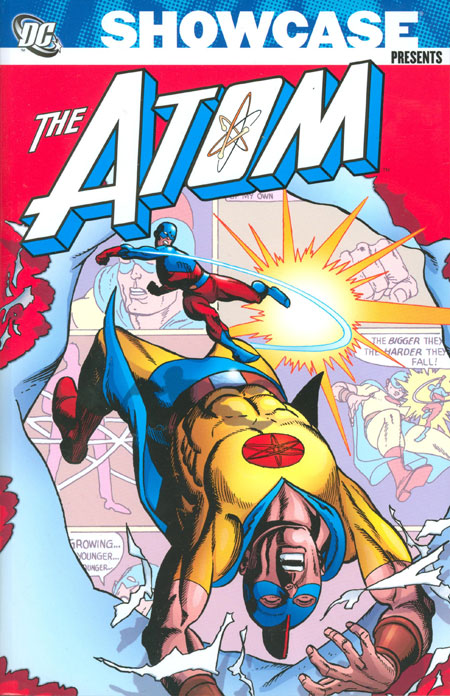 Overview: The Mighty Mite of Ivy Town returns in second volume of Showcase Presents The Atom. Scientist Ray Palmer discovered a way to miniaturize himself using a white dwarf star and ultra-violet rays. Donning a costume, Ray Palmer adopts the identity of the Atom, who can shrink and enlarge himself, as well as adjusting his weight for emphasis when needed. In addition to fighting the various costumed foes that threaten Ivy Town, the Atom also takes a dive into the time pool, when he is able to travel to events in the past.

The stories follow the same formula from the previous volume, where we either get one full-length story or two shorter stories per issue. The highlights of this volume is Ray Palmer meeting his Golden Age counter-part in Al Pratt, the Earth-2 Atom. The two Atoms actually had their first meetings in the first and second meetings of the Justice League and the Justice Society. But this volume features two issues, #29 and #36, that brings the two pint-size heroes together.

Why should these stories be Showcased?: As we move further and further away from the Golden Age and Silver Age of comics, we start to overlook some of the great people that worked on those books. Case in point, I would like to speak on editor Julie Schwartz. He came of age in the 1930s as a science fiction editor, helping writers to place stories in magazines. In 1944, he joined All-American Comics (one of the companies that would become DC Comics) as an editor. During his tenure, he brought in numerous science fiction authors to write comics. Schwartz oversaw the “Silver Age” debut of new versions of the Flash, Green Lantern, Hawkman, and the Atom. In the mid-1960s, he took over the editor reigns for the Batman books, overseeing that revitalization of that franchise. In the early 1970s, he did that again with the Superman family of books. What makes the Schwartz books stand out, particularly on titles like The Flash or The Atom, is that the stories were based in science, not just in fiction. The characters were scientists in their civilian lives. I know as a kid, I learned actual knowledge reading some of these comics. So yes, all Julie Schwartz edited books should be showcased, and The Atom is a great place to start!

The Atom #38 was the final issue with Ray Palmer as the solo feature of the title. Beginning with issue #39, the title was renamed The Atom and Hawkman, as Hawkman’s title had just been cancelled. The Atom and Hawkman ran for seven issues before it was cancelled as well. Parts of those seven issues can be found in Showcase Presents Hawkman Vol. 2. Excuse me for a moment while I get very angry with DC Comics. See, for The Atom and Hawkman #40, #41, #43, and #44, the two title characters have separate stories. However, Showcase Presents Hawkman Vol. 2 only reprints the Hawkman stories from those issues. That means that the Atom stories from issues #40, #41, #43, and #44 have not been reprinted! These were 10-12 page stories, so that would have meant 40-50 to include those four Atom stories, either in the Hawkman Showcase or this Atom Showcase.

To find the original issues, or reprints, of The Atom, check with your local comic book. In the Midwest, I strongly recommend Clint’s Comics in midtown Kansas City. Clint’s has been in business for nearly 50 years at the intersection of Main St. and Westport Rd. The back-issue selection is incredible, and what you see in the store is just a small fraction of their total inventory. In addition to the back issues, Clint’s stocks current issues, trade paperbacks, toys, T-shirts, and more. Check out Clint’s Comics to build your own essential collection!