Home › Jerry › I’ve Got Issues — That Has Not Necessarily Been My Experience, Captain

I’ve Got Issues — That Has Not Necessarily Been My Experience, Captain

Another Monday, another look at my reading list with I’ve Got Issues. I got so many great comics in the mail this past week, it was hard to narrow my picks down to three. If I had more time, I would offer up some thoughts on Archie #5, Spider-Woman #2, and Secret Wars #9. Want to know more about them? Send me a note and I will give you my thoughts on those books too! 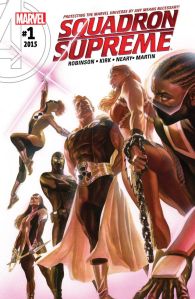 Spinning out of the recently-finished Secret Wars series, the new Squadron Supreme book is exactly the kind of book I was hoping we would get. Without spoiling Secret Wars too much – wait for the podcast later this week to do that! – the simple statement is that all of the various universes or dimensions in the Marvel Universe now exist in just the one universe. So with a title like Squadron Supreme, we have five characters from five different universes/time streams working together for the first time. Let’s do a quick rundown of who’s who:

This team is not happy with the world they find themselves on, and decide to take matters into their own hands, regardless how bloody it may get. They head into battle against a very familiar character in this first issue, which sets up a face-off with the Uncanny Avengers team in the near future. I so enjoy this book, and I will be making a run to the LCS this week to pick up issues #2 and #3 that I forgot to pre-order. James Robinson and Leonard Kirk have worked together on multiple projects in the past, and are a perfect fit for these characters. 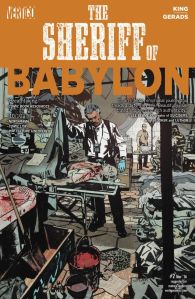 The Sheriff of Babylon #2

At the end of the year, I put out a couple of abbreviated I’ve Got Issues columns. I didn’t have full reviews, but I did list what I had read that past week. In one of them, I highlighted a book, The Sheriff of Babylon #1, and said that you needed to be reading this title. Four weeks later, I still stand by that recommendation!

Set in Iraq in early 2004, this is a crime drama story set in the middle of a warzone. Our protagonist is Chris Henry, a former Florida police officer and current military contractor. He has been assigned to help train and develop an Iraqi police force. Trouble arises when one of his recruits is found dead, and it wasn’t by natural causes. Henry’s investigation leads him deeper and deeper into the Iraqi criminal underground, which is being led by a surprising person.

As he has shown on his other book, Tom King’s writing is superb. King is a one-time C.I.A. operative who worked in Iraq during this time period, so he is pulling elements of reality into his own project. But the star of this book by far is Mitch Gerads, who is drawing and coloring the book. Just incredible to view and take in, with the incredible amount of detail in each panel without it being overly detailed. The color palette Gerads uses sets the tone for the story, giving the book the same heat-drenched look you would see in downtown Baghdad. As excited as I am about this title, I’m a little disappointed that this is only a six-issue mini-series. I hope that King and Gerads find stories to tell together in the future!

Stop me if you read or saw this story before. Imagine the Avengers, led by Iron Man, Captain America, and Thor, stopping an invasion from the Chitauri via a portal looming over New York City. OK, MAYBE it sounds a little familiar. But did that story (or movie) also feature the Vision, Nova, Ms. Marvel, and Spider-Man? Yeah, that’s what I thought, and that’s also why you should be buying this book!

So, as you can imagine, the heroes figure out a way to save the Earth, stop the Chitauri, and get rid of the guy that had been chasing Nova. At the end, Iron Man notes that they all worked pretty good together, and proposes that they officially work together as the Avengers… minus the Stark money and Stark headquarters.

Yet, as rosy and upbeat as that sounds, something is going on with the Vision. He collected some blackmail on Nova, and intends to use him in someway down the line. All of which just further proves that Mark Waid is evil. Despite his evil ways, I still nominated Waid as the Best Creator of 2015 in our Worst. Comic. Podcast. EVER! end-of-year survey! Waid wrote a lot of books in 2015, many of which have made this column over the last few months. 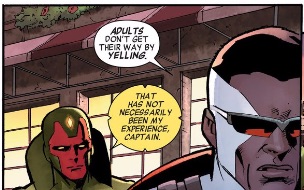