Welcome back to I’ve Got Issues, my weekly feature looking at some recent reads. In fact, I got all three books read this past week at one time – while waiting to see a doctor at the Urgent Care clinic. No worries, I wasn’t sick, it was my son.

Oh, and no worries, the son is OK. See, both of my kids got their mother’s good looks and their father’s two left feet. So John fell in a parking lot last weekend, prompting the visit to the Urgent Care. He injured a bone plate in his ankle, and gets to wear an over-sized moon boot for the next four weeks. Needless to say, the boy is milking this for all of the video game time he can get, with the foot propped up. Me, I would be milking this for all of the comic books I could get read, with the foot propped up.

So, you know the drill here. I talk about books I’ve read, and you chime in with your comments and reading recommendations. The reviews begin in 3….
2…
1…

True confession time — I just don’t “get” the character that Harley Quinn has become over the last 20 years. I understand the path she took from a supporting character introduced in Batman: The Animated Series to the DC Universe character to becoming a mainstream character in comics, video games, and movies (later this summer). But the evolution of the character is what throws me off. I don’t want to limit any character’s potential, but I just prefer my Harley to be a sidekick/paramour for the Joker. To me, she forces the Joker to play the part of the straight-man for the punchline, which confounds him to no end.

Now, with that context, I found myself really enjoying this book. Part of the charm is that this is a team-up book, where each month some character from the DC Universe will be forced into working with Harley Quinn. For this first issue, Harley meets up with her childhood hero, Wonder Woman. In an effort to make her plans succeed, Harley knocks out Wonder Woman and takes over the Amazon’s identity. Of course, that means Diana must don Harley’s outfit to give chase and eventually bail her out.

Jimmy Palmiotti and Amanda Conner, long time co-collaborators on the hi-jinx of Harley, are overseeing Harley’s Little Black Book. While I am not thrilled over the $4.99 price tag, it is 48 pages and it is a bi-monthly book. So in my head, I plan to look at this as a $2.50 per month book, and I will add it to my pull list. The next book is scheduled for February, where she will cross paths with Hal Jordan.

OK, I looked at issue #1 last month, and I LOVED IT! I’ve got issue #2 here in my hands, and while I am still in love with this title, I’ve got a huge problem with this particular issue. Robbie Thompson and Nick Bradshaw have once again crafted a fun tale from the early days of Spidey’s career. We get a battle with the Sandman, which forces Peter Parker to use his brain in addition to his skills in order to stop the villain from robbing a bank. And we find out that both Peter and Gwen are big fans of The Lord of the Rings!

My problem with this issue falls on the desks of editor Nick Lowe and assistant editor Devin Lewis. It’s not often that I feel the need to call out the editorial hands on a book, but this one falls on you guys. Within this issue, Bradshaw utilizes five double-page spreads. With the fifth double-page spread, it falls on story pages 19 and 20. If you are looking at the book, you would expect page 19 to be on the left side of the spread, and page 20 to be on the right side. But that’s not the case. Instead, page 19 of the story falls on the right side. To see the other half of the spread, you have to TURN THE PAGE. To quote Brian Orakpo, “C’mon man. What we doin’ out there, man?” Now, it might have been excusable if say story pages 16 & 17 were a double-page spread, and story page 18 was a single page. But there were three house ad pages immediately preceding this would-be double-page spread. THREE! This should not have happened, guys! 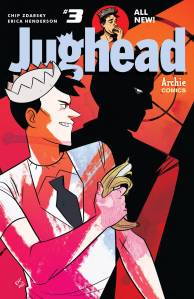 I’m featuring this book on my list for two reasons. Well, I could probably give you 40 or 50 reasons, but most of you wouldn’t stick around to the end to read all of them. So I will stick to the top two.