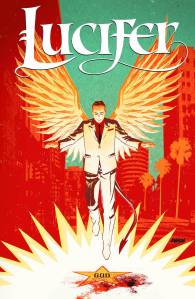 The curtains are drawing closed on another year, and most people are focused on the big holidays coming up. Don’t they realize that we have a special holiday once a week, where local comic shop vendors dispense comic books to everyone with a pull list, regardless of whether they are naughty or nice? For this upcoming new comic book day (ahem…cough…HOLIDAY), here are the four books I’m asking for (and when I say “asking for”, I mean “reminding myself to purchase”) on this majestic day of days.

Lucifer #1 ($3.99, DC/Vertigo): The thunder from down under has already had an assortment of series and mini-series under the DC/Vertigo imprint, but this time he’s about to take his nefarious ways to an entirely new type of series… a television series! Premiering on January 25, 2016, Lucifer will be loosely based on the Vertigo character that was introduced within the pages of Neil Gaiman’s The Sandman. Which calls for the ever-lovin’ “Good Jumping On Point,” hence the new comic. This new incarnation of the Lucifer comic series is written by Holly Black (The Spiderwick Chronicles) with art by Loki artist, Lee Garbett. The plot sounds very interesting… God is dead, and all signs point towards Lucifer! Accused of the murder by Gabriel, the two set off on a twisted buddy-cop investigation that reaches Above, Below and everywhere in between. Even though Lucifer has a motive to get rid of the Almighty, if he can prove his innocence, he’ll be welcomed back through the pearly gates.

Star Trek Starfleet Academy #1 ($3.99, IDW): The Starfleet Academy idea is not a new one. It seems like after every one of the Star Trek films that featured the original cast, rumors would fly that the next film would take it all back to the very beginning by showing us our favorite crew back when they were in school. William Shatner ghost-wrote a novel with Judith and Garfield Reeves-Stevens called Collision Course, which told the story of Spock and Kirk meeting at the Academy. There was a Starfleet Academy comic series published by Marvel Comics at one point, plus a series of Young Adult novels that came out shortly after the 2009 J.J. Abrams reboot film, Star Trek. This new comic series by IDW is written by Mike Johnson, with art duties by Derek Charm, and returns us to the Academy days of Kirk and crew from the Abrams-verse. See what happened before they each got assigned to the Enterprise, and we’ll also get to meet an all-new group of junior Starfleet officers as they begin their journey towards the final frontier! Beam this one up, folks.

Weirdworld #1 ($3.99, Marvel): I heard nothing but fantastic word of mouth about this title when it was a part of the Secret Wars mega-crossover that took up most of Marvel’s Summer and early Fall solicitation spots. I was very leery about jumping on the Secret Wars bandwagon, but now that the series is being introduced in the “All-New” Marvel Universe proper, I’m excited to take a gander and see what all of the hubbub was about! The book follows Becca, trapped in Weirdworld, a world of fantasy and all things sword and sorcery. What does she want? To get home. When does she want it? Before issue #2. We’ll have to read on to see if she gets her wish… being the POV character, I’m going to go ahead and guess that she won’t see home for a very long while. If you’re all about the barbarians and trolls and goblins and such, this is your book, True Believers! Join writer Sam Humphries and artist Mike Del Mundo on this journey to, around and through Weirdworld.

Batman ’66 #30 ($2.99, DC): This series has been so much fun. I’ve really enjoyed reading it and I wonder if Adam West and Burt Ward get royalty checks for their voices playing in my head while I read each issue. In this final installment, written by Jeff Parker, we get to see regular cover artist Mike Allred go batty throughout the whole book! The bad guys are gathering in Gotham for a Convict Convention (Convict Con – that should be a thing!), and one rat squeals on the whole dastardly group to the Dynamic Duo! Will this be the end for Batman ’66? Will Mike Allred’s interior art be as glorious as his cover for this issue, which features many sentimental old Batman toys and collectibles? Tune in at the same Bat-Time and same Bat-Comic Book Company this one last time to find out!

Don’t forget that #FCIW is published via the support of Elite Comics in Overland Park, KS. William and the crew at Elite maintain a welcoming, polite and inviting comic shop and supports many local and national comic-related organizations, such as The Hero Initiative. These four books, along with many, many others can be found at Elite Comics. When you stop in, let them know that the folks at Worst. Comic. Podcast. EVER! were responsible for your visit!