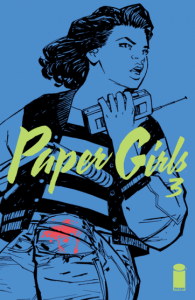 It’s officially holiday season! You may be busy buying gifts for others, but don’t forget to “treat yo self” to some comic books. I’ve picked out some exciting first issues and some continuing mysteries for the Four Comics I Want this week. What are you looking forward to picking up?

Survivors’ Club #3 ($3.99, Vertigo/DC): It’s exciting to see Vertigo has returned to the dark horror comics that made them great. I’m a huge horror aficionado, but its been awhile since I looked forward to picking up a book like Survivors’ Club. This series brings together survivors of 1980s slasher film-type experiences who are all facing a present-day supernatural threat. I love that Survivors’ Club plays on the tropes of the ’80s horror movies, but still manages to be be incredibly unique and downright creepy. Writers Lauren Beukes and Dale Halvorsen do a great job of setting up the story in the first two issues; they focus a lot on developing the characters and their backstories, which I think will pay off well later. Survivors’ Club has the makings of a great mystery/horror story, and I’m very interested in seeing how it plays out.

Seduction of the Innocent #1 ($3.99, Dynamite): Local writer Ande Parks and artist Esteve Polls team up to bring us a fascinating new 1950s-style crime drama. The title in and of itself is intriguing, since ironically Seduction of the Innocent is also the title of a 1950s book about how comic books brainwash the minds of youth with sex and violence, and lead to juvenile delinquency. This new Seduction of the Innocent, however, has been described in the announcement as “gritty and sometimes depraved,” which is exactly what a crime drama should be, in my opinion. The story follows an FBI agent as he investigates the systemic murder of San Francisco’s crime lords. I’ve always enjoyed Parks’ style of writing and his last team-up with Polls on The Lone Ranger was great. Do not miss out on this title, especially if you’re a fan of the ’50s-style crime comics!

Daredevil #1 ($3.99, Marvel Comics): With the popularity of the Netflix Daredevil show, it was only a matter of time before Marvel rebooted the comic series. Daredevil has always been a darker character, but the TV series brought us a whole new level of grit and violence, which people (including me) loved! I have a feeling that this new comic series will continue along the same path, especially after seeing his new black costume. Yes, Daredevil is finally back fighting crime and prosecuting bad guys, but it looks like he has some company this time. According to the solicit, he has taken a new hero named Blindspot under his wing. Marvel has made some awesome new characters lately so I’m really excited to see what they do with this Blindspot guy. Whether you love the Daredevil TV series or not, I would recommend seeing what this comic has to offer.

Paper Girls #3 ($2.99, Image Comics): Paper Girls is a new ongoing series by Brian K. Vaughan, and of course I have to pick it up, because I’m basically obsessed with everything he writes. Like all of Vaughan’s stories, Paper Girls is off to a great start. Its about 1980s bad-ass chicks AND aliens. What’s not to love? The first issue started out a little slow, but the action ramped up considerably in the last issue. I’m sure the mystery will continue to get even more compelling in issue #3. I don’t know if Paper Girls will be as good as Vaughan’s other series, but I will definitely stick around to find out!