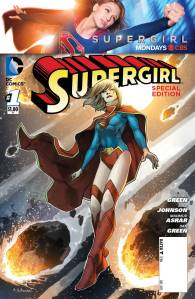 So, did you watch the new Star Wars trailer? All right, I know that’s a dumb question. The actual question should be, how many times did you watch the new Star Wars trailer? I’m up to seven viewings, and I may just put it on a loop for background noise at work today. Anyway, I seem to have cinema on my brain today with my picks for Four Comics I Want for New Comic Book Day tomorrow. This week, I’ve picked two books based off of movie franchises; one book that was once a movie, and will soon be a TV franchise; and one book that is just so freakin’ awesome that it should be a movie. I bet you can figure out which one is which!

Back to the Future #1 ($3.99, IDW Publishing): Have you looked at the calendar for tomorrow? It will be October 21, 2015, otherwise known as “Back To The Future Day.” See, 30 years ago, we learned that Marty McFly would travel through time, in a DeLorean nonetheless, to arrive in Hill Valley, California, on October 21. So there are all kinds of Back To The Future (BttF) events planned from coast to coast. Some of your larger theaters may even be showing the movie for your viewing pleasure. Now, for your reading pleasure, the fine folks at IDW have commissioned a Back to the Future comic book. Sure, anyone can do a comic like this – Harvey Comics had two BttF mini-series in the early 1990s, which were based on the BttF cartoon, which in turn was based on the movies. But IDW has raised the bar to a new level, by bringing in BttF screenwriter Bob Gale in to write the new comic book. I don’t know what Gale has planned for this title. But I have to imagine that when this title hits 88 pages, we’re going to see some serious…

Weirdworld #5 ($3,99, Marvel Comics): What is there left for us to say about this book? The WCPE has had mad man-crushes on this title all summer long. Jason Aaron is at his best with this fantasy epic that combines so many different elements of Marvel’s rich history. Mike Del Mundo’s art comes alive panel after breath-taking panel. The only potential disappointment with this issue is that it is the final issue of the series. Yes, the Weirdworld concept will continue with Black Knight, but not with the same creative team. That said, we will always remember this wonderful summer of 2015, when we all took a summer vacation to Weirdworld.

Star Trek#50 ($4,99, IDW Publishing): The ongoing adventures of the Enterprise crew reaches it’s 50th issue. It may not seem like that significant of a milestone, but you can pretty much count on your two hands which books have run longer without a renumbering or reboot over the last four years. Mike Johnson has been guiding this title since the start, and done a wonderful job mixing in new stories alongside modern retellings of the classic 1960s episodes, but using the current cinematic cast. For this anniversary issue, we get the first of a three-part story that adapts one of my favorite Star Trek concepts, the Mirror Universe. Will the Mirror Universe Kirk look like Chris Pine, or maybe like Mark-Paul Gosselaar? Guess you will need to get this issue to find out.

DC Essentials: Supergirl #1 ($1.00, DC Comics): Breaking news here at the Worst. Comic. Podcast. EVER! – we are now less than one week away from the premiere of Supergirl on CBS next Monday night. In support of the TV debut, DC Comics is re-releasing Supergirl #1 from 2011, which was part of the New 52 relaunch. Not only that, but they are bargain-pricing it at only $1. Seriously, just $1. You probably have a dollar in change in your pocket or purse right now. So, if you are reading this, odds are you might be one of the comic book tribe, as we like to call it here at the WCPE. If you are the comic book fan in your circle of friends and family, everyone will be coming up to you next week to talk about Supergirl. But I want you to be better prepared. At the store tomorrow, pick up four copies of this book. At $1 each, that’s just like buying one of the new books featured in this list. If you want to keep one for yourself, I understand. But make it a point next week to give out the extra copies you buy, especially as your co-workers or friends come up and start asking questions about the show and the character. You could leave a copy in a public place, like a doctor’s office or on the bus. Or hand some out at Halloween to some kids! Use this chance to share our love for comics with more people.