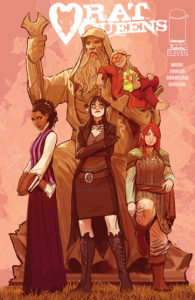 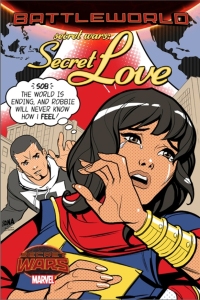 I’m excited to get back to reading comics. I’ve been so busy with cosplay and KCCC, I’ve hardly had time to pick up my weekly issues! It’s horrible, I know, but this seems like pretty great week to start reading again. There are issues from promising new series and from series I already know I love! Here are my four most anticipated comics; what issues do you plan on picking up?

Rat Queens #11 ($3.99, Image Comics): Rat Queens is back, this time with an all new story arc and art team. If you haven’t started reading Rat Queens yet, this would be a perfect place to jump on board and start reading one of the best comic titles out there. I can’t wait to see what the Rat Queens’ new adventure will be about, and I have no doubt it will have all the violence, magic, sarcasm, and intelligence I have become accustomed to. It looks like we will also get some more background on our favorite lady warriors in these new issues, so there is even more to look forward to! Unfortunately my favorite artist, Stjepan Sejic, had to step down due to health issues, but I have no doubt the new female art team of Tess Fowler & Tamra Bonvillain will do justice to this fantastic title!

Secret Wars: Secret Love #1 ($4.99, Marvel Comics): You don’t have to be following the Battleworld events to enjoy this fun, romance-centered anthology. In Secret Love, we get to see Squirrel Girl win a date with Thor; how Kamela and Robbie’s relationship survives Battleworld; an ant-versary; and much more. I personally love anthologies because you get to admire several different writing and art styles all in one issue! Sometimes these inconsequential one-shots are ignored, but I think this one is definitely worth adding to your pull-list.

Wolf #2 ($3.50, Image Comics): It’s no secret that Image is one of my favorite publishers — they consistently put out unique, well-written stories, and Wolf is no exception. Wolf is essentially about an immortal detective named Antoine Wolfe who investigates the paranormal underbelly of Los Angeles. The huge 58-page #1 issue provided a lot of information and did a great job of setting up the story and the dark supernatural world it takes place in. Ales Kot certainly knows how to write an intriguing mystery and well-rounded interesting characters. Wolf #1 definitely hooked me, and left me excited for issue #2 and beyond!