Home › Jerry › Throwback Thursday – On My Way to Sunny California…

Throwback Thursday – On My Way to Sunny California… 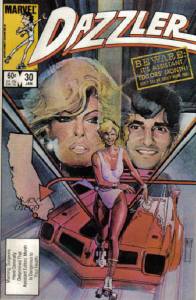 Funny how things work out like this. Two months ago, I looked at an issue of The Avengers, which happened to feature David Letterman. It was part of an event at Marvel Comics known as Assistant Editor’s Month. This was a gimmick that Marvel did throughout most of their books with the January 1984 release date. The story was that all of the Marvel editors left New York City to attend the San Diego Comic Con, and left the assistant editor’s in charge for a month. So for this one month, a lot of quirky stories took place in the Marvel universe – some better than others. I probably was the one kid in America that hoped Assistant Editor’s Month would happen every year going forward.

So one of the Assistant Editor’s issues was Dazzler #30. Now, Dazzler is one of those characters that you had to be reading at the time to fully appreciate. Take a look at my review of the first Essential Dazzler collection to get caught up on the early days of the character, as well as the history of how the character came to be. She’s more interesting than you probably realize.

For this issue, it starts out with eight pages wrapping up the story from the previous issue. That ends with our hero, Allison Blaire, walking out of Los Angeles in the rain. Now a kind stranger pulls over and offers Allison a ride, because it’s raining and she doesn’t look like a mugger. Allison has no problems getting in the car, and decides to ride with the driver for as far as he is going. Turns out, the driver is Marvel editor Ralph Macchio, and he is on his way south to the San Diego Comic Con. They reach the destination (in just a few panels), and go their separate ways.

Turns out that Allison is being pursued — by a covert military group. They fully intend to track Dazzler down, as they view her as potentially one of the most dangerous mutants ever. Following Allison to the San Diego Comic Con (because she had gone there to repay Ralph some money), the military group pulls out a specific machine designed to flush out any mutants. The machine works, but apparently Dazzler was not the only mutant in attendance at the SDCC that year. One of the military personnel undergoes a mutation, turning into a human-size version of Godzilla.

Of course, this means that the Dazzler must battle this new found mutant on the convention floor, which leads to a lot of damage and destruction. I know the crowds 30 years ago were no where near as large as they are today, so I’m going to assume everyone got out safely. Well, except for Ralph – he got knocked down by some falling rubble, but managed to get to his feet when Dazzler came running up to him. Despite the destruction of SDCC, Dazzler’s main concern is to pay back the money that Ralph had given her. That’s how she rolls, I guess.

So lessons learned from this issue:

This comic has been reprinted just once, in Essential Dazzler Vol. 2, which I will be reviewing shortly for Essential Showcase. But if you would like to give this issue a read in full color, then dive into a back-issue bin to track it down. For those readers in the Kansas City market, I would point you downtown to Clint’s Comics. Located at 3941 Main Street, Clint’s has one of the greatest back-issue selections in the midwest, as well as new comic books, trade paperbacks, toys, t-shirts, and more. Whether tracking down a copy of Dazzler #30 or some other prized book from your past, Clint’s is a great place to start your back-issue treasure hunt! 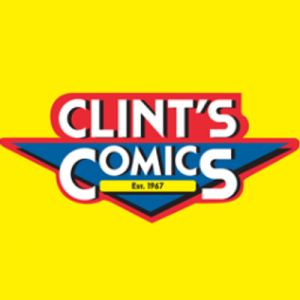